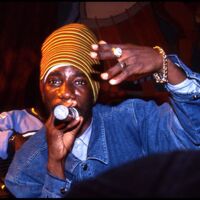 Sizzla Net Worth: is a Jamaican reggae musician who has a net worth of $500 thousand. Sizzla was born April 17, 1976 in Kingston, Jamaica. He is one of the most commercially and critically successful contemporary reggae artists of his time and is noted for his large number of releases; as of 2014 he had released over 70 solo albums. Emerging during the latter half of the '90s, the enormously prolific Sizzla was one of the leaders of the dancehall movement. Along with Buju Banton and Capleton, he helped lead dancehall back to the musical and spiritual influence of reggae roots, favoring organic productions and heavily Rastafarian subjects. A member of the militant Bobo Ashanti sect, he sometimes courted controversy with his strict adherence to their views, particularly his aggressive condemnations of homosexuals and white Western oppressors, though his music was (overall) positive, advocating faith and compassion for poor black youth and respect of women. He rarely appeared in public at large and rarely granted interviews—concert appearances were kept to a minimum. Thanks to a consistently high standard of quality control, all the more impressive given the frequency with which he recorded, he maintained his status as one of the most popular conscious reggae artists of his time. A versatile singjay-style vocalist with a gruff, gravelly tone, he was capable of both rapid-fire chatting and powerful, melodic singing and his best backing riddims (rhythms) were among the strongest in contemporary dancehall. On August 24, 2011, Sizzla was hit by a bus while riding his motorcycle along the Salem main road, near Runaway Bay in St. Ann, Jamaica, leading to many false reports of the singer's death. He resumed recording by the beginning of the following year.