Sixto Rodriguez Net Worth: Sixto Rodriguez is an American folk musician who has a net worth of $5 million. Professionally known as Rodriguez, Sixto released the 1967 single "I'll Slip Away" under the name Rod Riguez, then put out two studio albums, "Cold Fact" (1970) and "Coming from Reality" (1971), after signing with Sussex Records. Since the albums didn't sell well in the U.S., Rodriguez was dropped by the label and subsequently quit music. Unknown to Sixto, his music became extremely popular and successful in South Africa and Australia in the 1990s. At one point in time, he was possibly more famous than Elvis Presley in South Africa. Most of his foreign fans were under the impression that Rodriguez had committed suicide during one of his concerts in the 1970s.

Sixto's life was the subject of the 2012 documentary "Searching for Sugar Man," which went on to win an Academy Award and more than 40 other awards. The documentary featured two of his South African fans attempting to find out what happened to Rodriguez, and it earned him a Creative Recognition Award for Best Music from the International Documentary Association. The soundtrack for the film reached #1 on the Swedish charts and the U.S. "Billboard" Heatseekers Albums charts and was certified Platinum in Sweden and Poland. Sixto's two studio albums were re-released in 2012 and cracked the top 20 in Denmark, Sweden, Australia, and New Zealand.

Early Life: Sixto Rodriguez was born Sixto Diaz Rodriguez on July 10, 1942, in Detroit, Michigan. Sixto's parents chose his name because he was their sixth child. Both of Rodriguez's parents were from Mexico, and his father immigrated to the U.S. in the 1920s. Sixto attended Wayne State University's Monteith College, earning a Bachelor of Philosophy in 1981.

Career: After releasing the single "I'll Slip Away" in 1967, Rodriguez recorded the albums "Cold Fact" and "Coming from Reality" in the early 1970s. He released the singles "Inner City Blues"/"Forget It" and "To Whom It May Concern"/"I Think of You" in 1970. Sixto began recording a third album, but he didn't have a chance to finish it before his record label dropped him. Rodriguez left the music business and worked production line and demolition jobs; he also ran for public office (unsuccessfully) several times, even running for Mayor of Detroit in 1981. In the mid-1970s, his albums began getting airplay in countries such as South Africa, New Zealand, Australia, Zimbabwe, and Botswana, and imported copies of his studio albums sold out, prompting Australian record label Blue Goose Music to purchase the Australian rights to Sixto's albums. The label then released his original albums and a 1977 compilation album called "At His Best," which was certified Platinum in South Africa, where some of his music was used as anti-Apartheid anthems. Rodriguez toured across Australia in 1979 and 1981, and his first two albums were released in South Africa on CD in the 1990s

Sixto remained unaware of his fame in South Africa until 1997, when his daughter found a website that was dedicated to her father's music. She contacted the website's owners, which led to Rodriguez embarking on a South African tour; a documentary about the tour, "Dead Men Don't Tour: Rodriguez in South Africa," was released in 1998. That year, his song "Sugar Man" was covered by Just Jinger, a South African rock band, and Paolo Nutini, a Scottish singer-songwriter, and it was featured on disc jockey David Holmes' 2002 mix album "Come Get It I Got It." The song was also sampled on the 2001 Nas track "You're Da Man" and featured in the 2006 Heath Ledger film "Candy." After "Searching for Sugar Man" was released in 2012, Sixto's popularity in the U.S. grew, and he was invited to perform on the "Late Show with David Letterman" and "The Tonight Show with Jay Leno." Rodriguez was featured on "60 Minutes" in October 2012, and he appeared on the U.K. shows "Later… with Jools Holland" and "The Andrew Marr Show" the following month. Sixto toured the U.S. in 2013, and in 2015, he was the opening act on Brian Wilson's concert tour. The book "Sugar Man: The Life, Death and Resurrection of Sixto Rodriguez" was published in 2015.

"Searching for Sugar Man": In 2012, the documentary "Searching for Sugar Man" premiered at the Sundance Film Festival, where it won the Audience Award, World Cinema Documentary and World Cinema Special Jury Prize. The documentary, which was directed by Malik Bendjelloul, was screened at several film and music festivals, and in November 2012, it received the Best Music Documentary Award and Audience Award at the International Documentary Film Festival Amsterdam. In 2013, "Searching for Sugar Man" won an Academy Award for Best Documentary Feature, but Rodriguez didn't attend the ceremony because he wanted to avoid overshadowing the filmmakers' achievement. The film also won awards from the BAFTA Awards, Alliance of Women Film Journalists, American Cinema Editors, Australian Film Critics Association Awards, Broadcast Film Critics Association Awards, Cinema for Peace Awards, Gold Derby Awards, and Writers Guild of America. The film's soundtrack consists of songs from "Cold Fact" and "Coming from Reality" as well as previously unreleased tracks from his unfinished third album.

Personal Life: Sixto has been married twice and is separated from Konny Koskos, who he wed in 1984. He has three daughters, Eva, Sandra, and Regan, and his family often goes on the road with him. A 2013 "Rolling Stone" article revealed that Rodriguez doesn't own a car, TV, or computer, and Regan stated that her father believes there are "three basic needs – food, clothing and shelter. Once you get down to that level, everything else is icing."

Real Estate: In 1976, Rodriguez bought a home in Detroit, Michigan's Woodbridge neighborhood from a government land auction. The home cost him just $50. 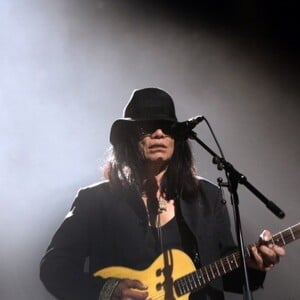