Sir James Galway net worth: Sir James Galway is an Irish musician who has a net worth of $20 million. Sir James Galway was born in Belfast, Northern Ireland in December 1939. He is a virtuoso flute player who has been nicknamed "The Man With the Golden Flute". Galway has followed Jean-Pierre Rampal as being one of the first flute players to become established as a soloist.

He has studied at the Royal College of Music, Guildhall School of Music, and Paris Conservatoire. He then spent 15 years as an orchestral player with the likes of the London Symphony Orchestra and the Royal Philharmonic Orchestra. Galway's album James Galway and The Chieftains in Ireland reached #32 on the UK Albums chart in 1987. Galway played at Roger Waters' concert The Wall – Live in Berlin in 1990. He has sold more than 30 million copies of his music and performed on the soundtracks for The Lord of the Rings film trilogy. He is the president of the charitable organization Flutewise which supports young flute players. 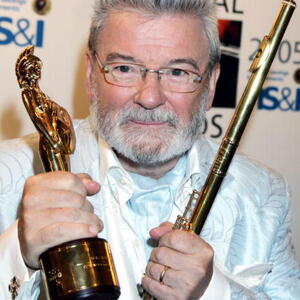