Siobhan Magnus is an American singer-songwriter who has a net worth of $1.2 million. Siobhan Magnus has earned her net worth as a sixth place finalist on American Idol's ninth season of the show. She was born on March 15, 1990 in Barnstable, Massachusetts. Magnus comes from a musical family her father Alan is a singer-songwriter, her siblings play in various bands, and her brother Rory is in the film animation industry. Her aunt is Tracy Ferrie, who was a bassist for the Christian metal band Stryper and her uncle Alan Ware, drummer for Ultrasonic Rock Orchestra. Her first public singing experience was in a fourth grade choral concert when she sang "Tomorrow" from the play Annie. She attended Barnstable High School in Hyannis, Massachusetts and graduated in 2008.She was a member of the drama club, she was featured as one of three Dorothys for the play The Wizard of Oz. Magnus auditioned for American Idol in the summer of 2009 in Boston, she was one of two Massachusetts contestants to make the semi-finals of the show. However she was eliminated during top 6 week, this came as a big surprise for many Idol fans. The following week after Magnus's elimination from Idol the show experienced the lowest ratings since 2002. 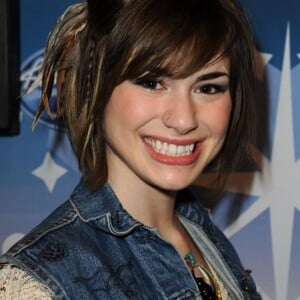