What is Sinéad O'Connor's Net Worth?

Sinéad O'Connor is an Irish singer who has a net worth of $1.5 million. O'Connor is probably most famous for her somewhat controversial singing career that reached its peak in the 1990s. Her career in music began in the early 1980s, with Sinéad eventually joining up with a band called Ton Ton Macoute. Her work with the band eventually earned her a record deal with Ensign Records, where her first important project was recording a song with legendary guitarist The Edge of U2 for the 1986 movie "Captive." O'Connor continued to record music, and she produced her first album, 1987's"The Lion and the Cobra," at age 20.

It wasn't until her second album, 1990's "I Don't Want What I Haven't Got," that her breakout song was latched onto by audiences. The song, "Nothing Compares 2 U," was written by Prince and was famous for its austere music video, which featured a close-up of O'Connor sadly singing the ballad before crying a single tear. Sinéad became a big star after that, but her career descended into controversy after she infamously tore up a picture of Pope John Paul II on "Saturday Night Live" in 1992, an action that still carries consequences for her career to this day. O'Connor has released 10 studio albums, and in 1999, she was ranked #35 on VH1's "100 Greatest Women of Rock & Roll" list. In December 2020, it was announced that Sinéad's memoir, "Rememberings," will be published in June 2021.

Sinéad O'Connor was born Sinéad Marie Bernadette O'Connor on December 8, 1966, in Glenageary, County Dublin, Ireland. She has four siblings – John, Eimear, Joseph, and Eoin – and her parents, Marie and Sean (a structural engineer, then barrister), divorced when Sinéad was young. After the divorce, she originally lived with her abusive mother, but she decided to live with her father and stepmother in 1979; her mother died in a car accident a few years later. At the age of 15, O'Connor was sent to Magdalene Asylum, a Catholic Grianán Training Centre, for 18 months due to her truancy and shoplifting; Sinéad has said that certain incidents at Magdalene caused her "panic and terror and agony." O'Connor later dropped out of high school and got a job with a singing telegram service in Dublin and began performing music in pubs and on the street.

When Sinéad was 15, the sister of In Tua Nua drummer Paul Byrne heard her sing Barbra Streisand's "Evergreen" at Magdalene Asylum and put her in touch with Byrne. O'Connor recorded the song "Take My Hand" with the band, and in 1984, she started her own band, Ton Ton Macoute, and caught the attention of the owners of Ensign Records. Sinéad soon signed a record deal, and Ensign released her debut album, "The Lion and the Cobra," on November 4, 1987. The album went Gold and peaked at #3 on the Irish Albums Chart and #4 on the Official New Zealand Music Chart. Her follow-up, 1990's "I Do Not Want What I Haven't Got" reached #1 on the charts in several countries and was certified Platinum or higher in the U.K., the U.S., Australia, Germany, Canada, and France. The single "Nothing Compares 2 U" topped the charts in more than a dozen countries and was named the year's #1 World Single at the 1990 "Billboard" Music Awards. O'Connor followed the massive success of "I Do Not Want What I Haven't Got" with the albums "Am I Not Your Girl?" (1992) and "Universal Mother" (1994), and in 1997, she played the Virgin Mary in the film "The Butcher Boy." 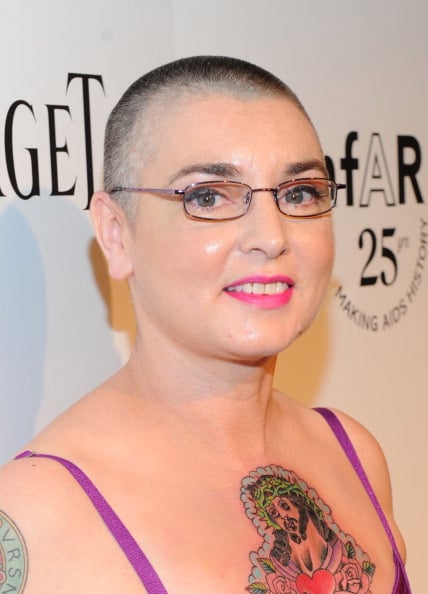 In 2000, Sinéad released her first album in six years, "Faith and Courage," and 2002's "Sean-Nós Nua" was an album of traditional Irish songs. In 2003, she covered Dolly Parton's "Dagger Through the Heart" for the tribute album "Just Because I'm a Woman" and released the compilation album "She Who Dwells in the Secret Place of the Most High Shall Abide Under the Shadow of the Almighty" before announcing her retirement. O'Connor's retirement didn't last long, and in 2005, she released the reggae album "Throw Down Your Arms." She then released 2007's "Theology," 2012's "How About I Be Me (and You Be You)?," and 2014's "I'm Not Bossy, I'm the Boss." In 2014, Sinéad took part in the recording of the charity single "Do They Know It's Christmas?," which raised funds to fight the Ebola virus in Africa.

Financial Problems and Other Controversies

In August 2017, it was revealed that Sinéad has been living in a $70-per-night motel in New Jersey after losing the majority of the fortune she earned at the height of her fame. Adding to her problems has been the fact that she was diagnosed as bipolar earlier in life and has struggled with mental issues most of her adult life. These issues have caused her to lose custody of her son in addition to experiencing other financial challenges. In January 2017, O'Connor listed her longtime property in Dublin for $1 million, which is nearly $1 million less than what she paid for the house in 2009. She was somewhat forced to sell the house after settling various tax problems with the government of Ireland.

Sinéad has changed her name twice, to Magda Davitt in 2017 and Shuhada' Sadaqat (after converting to Islam) in 2018. O'Connor married music producer John Reynolds in 1987, and they welcomed son Jake on June 16th of that year, when Sinéad was 20 years old. They divorced in 1991, and O'Connor had a daughter, Roisin, with journalist John Waters on March 6, 1996; Sinéad and John entered into a custody battle over Roisin that ended with O'Connor attempting suicide and agreeing to let Waters have custody of their daughter. Sinéad was married to journalist Nick Sommerlad from July 2001 to February 2004, and she had a son, Shane, with musician Donal Lunny on March 10, 2004. On December 19, 2006, O'Connor gave birth to her fourth child, son Yeshua, whose father is businessman Frank Bonadio. Sinéad married her friend/collaborator Steve Cooney on July 22, 2010, and after they divorced, she wed therapist Barry Herridge on December 8, 2011. O'Connor and Herridge split up 16 days after their Las Vegas wedding but reportedly reconciled in 2014.

Sinéad was diagnosed with bipolar disorder in 2003 and has said that she's an agoraphobic. In 2015, she underwent a hysterectomy and has said that she believes her mental health issues were exacerbated by her medical team's refusal to give her hormonal replacement therapy, saying that her procedure resulted in "surgical menopause" and caused her to become suicidal. In 2016, O'Connor sought treatment at a rehabilitation center because she wanted to end her dependence on cannabis, which she had smoked for three decades. In 2017, Sinéad posted a video on social media in which she stated that losing custody of her son Shane had caused her to feel alone and that she'd been wanting to kill herself for the past two years. O'Connor attempted suicide in 2012 and 2015, and in November 2020, she announced that she was entering a one-year rehabilitation program to treat addiction and trauma.

O'Connor has been nominated for eight Grammys, winning Best Alternative Music Performance for "I Do Not Want What I Haven't Got" in 1991. She has also earned six MTV Video Music Award nominations, winning Video of the Year, Best Female Video, and Best Post-Modern Video for "Nothing Compares 2 U" in 1990. In 2012, Sinéad received a World Soundtrack Award for Best Original Song Written for a Film for "Lay Your Head Down" from the "Albert Nobbs" soundtrack, and the song earned her a Golden Globe nomination as well. O'Connor won Rock Female Artist and No.1 World Single at the 1990 "Billboard" Music Awards, and that year she also received a Rockbjornen award for Best Foreign Artist. In 1991, she earned a Brit Award for International Female Solo Artist and a Danish Music Award for Foreign Female Artist of the Year, and "Nothing Compares 2 U" was named the Danish Music Awards Foreign Hit of the Year. Sinéad won a Goldene Europa Award for Best International Singer in 1994, and she has earned nominations from the Juno Awards, American Music Awards, International Dance Music Awards, and Meteor Music Awards. 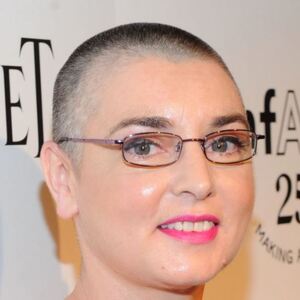