Siedah Garrett Net Worth: Siedah Garrett is an American singer and songwriter who has a net worth of $10 million. Siedah Garrett was born in Los Angeles, California in June 1960. Garrett has written songs and performed background vocals for many popular recording artists. In 1980 she appeared as a contestant on Password Plus.

She sang "One Man Woman" for Quincy Jones and the joined the group Plush. Some of her hits include "Don't Look Any Further", "Do You Want It Right Now?", "Everchanging Times", and "K.I.S.S.I.N.G.". Siedah sang the duet "I Just Can't Stop Loving You" with Michael Jackson and co-wrote his #1 song "Man in the Mirror". Garrett sang on many Quincy Jones albums and co-wrote "Back On The Block", "Tomorrow (A Better You, Better Me)", and "The Secret Garden (Sweet Seduction Suite)". She toured and sang backup vocals on Michael Jackson's Dangerous World Tour. She appeared on episodes of The Facts of Life and Amen and starred in the TV movie Wally and the Valentines. Garrett joined the Brand New Heavies in 1996 and was featured on their album Shelter. She toured with Madonna in 2004 on The Re-Invention Tour. She appeared on American Idol in 2011 singing with contestants. In 2008 Garrett won a Grammy Award for Best Song Written for a Motion Picture, Television or Other Visual Media for "Love You I Do" from Dreamgirls. 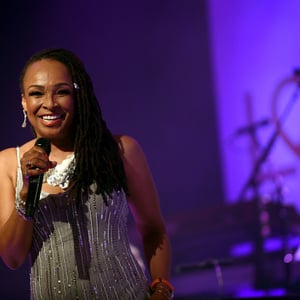