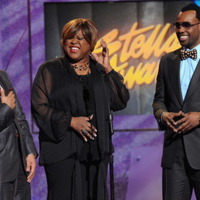 Shirley Murdock net worth: Shirley Murdock is an American R&B singer who has a net worth of $2 million dollars. Shirley Murdock was born in Toledo, Ohio, and began singing in the gospel church when she was young. She caught the attention of Roger Troutman of the band Zapp, and she went on to work as a backup singer for the group. He also began recording tracks with her at his own studio, and their first single, "Girl, Cut It Out", reached #79 on the R&B charts in the mid-80s. Shirley Murdock subsequently signed with Elektra Records, and went on to release five studio albums, all of which spawned hit songs, including "As We Lay", "Go On Without You", and "Husband", all of which reached #5 on the R&B charts, and "In Your Eyes", which reached #7. Her first album, "Shirley Murdock!", was certified Gold. In addition to her recording career, she has also appeared in two films, and toured with two plays, "Be Careful What You Pray For" and "A Mother's Prayer".