Sharlene Taule Net Worth: Sharlene Taule is a Dominican singer, actress and presenter who has a net worth of $5 million. Sharlene Taule was born February 4, 1983 in Santo Domingo, República Dominicana. She studied singing with Mary and Nadia RemoAbout Nicola, and acting at the Lee Strasberg Theater Institute in New York.

His filmography includes La Fiesta del Chivo, Travelers, Yuniol, Tropico de Sangre, La Soga, Flucht Aus Santo Domingo and Code 666, a performance that earned her a nomination for Best Actress award – Sovereign Film. In theater she appeared in Evita, Les Miserables, Fiddler on the Roof, Hairspray, Cinderella and the play The Graduate. Her television credits include the title role in the music video Bendita tu Luz Mana and a role in an HBO Short Film, for the which she was awarded for several episodes of Soko Leipzig German series. She has also appeared in several other soap operas as well as served as a presenter of programs SantoDomingo Invite, VIP TV and The Fan Club. She also served as radio announcer for Point and Thru and Over and Out. In the telenovela Grachi she played the role of 'Katty', which garnered her many fans from countries such as Mexico, Argentina, Colombia and Venezuela. She was most recently cast in the role of 'Camila Barrera' in Forbidden Passion, a Telemundo novela. 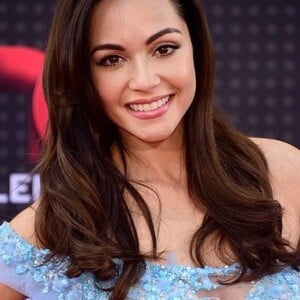