Shakin Stevens Net Worth: Shakin Stevens is a Welsh rock and roll singer and songwriter who has a net worth of $20 million. Shakin Stevens was born in Cardiff, Wales in March 1948. Stevens is the UK's biggest selling singles artist of the 1980s. He started his career in the late 1960s but did not become a commercial success in his native land until 1980.

He has had 33 Top 40 hit singles in his career. He started off as the front man of Shakin' Stevens and the Sunsets in 1968. The band got a supporting slot for The Rolling Stones in 1969. Stevens portrayed Elvis in the West End musical Elvis!. His debut studio album A Legend was released in October 1970 on Parlophone. Stevens' 1981 This Ole House was released in 1981 on Epic Records and found success being certified Gold in five countries. His 1981 album Shaky went Platinum in five countries and Gold in four more. The album reached #1 in the UK and Austria. His 1982 album Give Me Your Heart Tonight also was successful. His most popular hits include "This Ole House", "You Drive Me Crazy", "Green Door", "It's Raining", "Oh Julie", "Shirley", "Give Me Your Heart Tonight", "Cry Just A Little Bit", "A Rockin' Good Way", "A Love Worth Waiting For", "Teardrops", "Breaking Up My Heart", and "Merry Christmas Everyone". His single "Merry Christmas Everyone" has re-entered the charts in the UK every year since 2007. 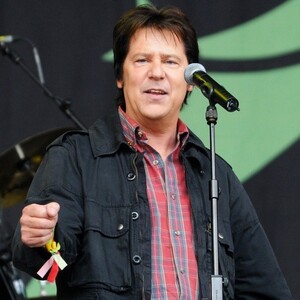