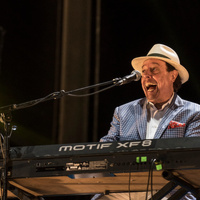 Sergio Mendes Net Worth: Sergio Mendes is a Brazilian musician who has a net worth of $45 million. Mendes was born in February of 1941 and is best known for his large number of records, which incorporate a number of different genres, including bossa nova, jazz, and funk. Since he started performing professionally in the 50s and 60s, he has become a musical legend. He still continues to perform today and contribute to original music, as well as other artist's work. In 2012 he wrote a song for the animated movie, Rio, called Real in Rio. For the tune, he was nominated for an Academy Award for best original song. To date, he has more than 55 releases, which have gained widespread attention across the world. He has also collaborated with a number of different artists, including the Black Eyed Peas. Together they recorded an alternate version of his song, Mas Que Nada, which is also considered to be a breakthrough hit. It was released in 2006 and went on to sell a number of copies in both Brazil and the United States. Mendes is married to fellow singer Gracinha Leporace, the pair has been performing together for more than 40 years.