Sara Stokes net worth: Sara Stokes is an American actress and singer who has a net worth of $50 thousand dollars. Born June 1, 1974 in Detroit, Michigan, Sara Stokes was known earlier in her career for her roles in Resurrection: The J.R. Richard Story (story of famed Houston Astros fastball pitcher)(2005) and YaDaDa Movie (2006).

She became better known, and even somewhat infamous, for her participation in Making the Band 2 (2002). Stokes was a part of the band 'Da Band', a hip-hop group assembled by American rapper P. Diddy (Sean Combs). Diddy held tryouts and over 40,000 participants auditioned-Diddy narrowed it down to six artists and, on a reality show called Making the Band, subjected the six artists to rigorous (and sometimes demeaning) tasks. The group's story was documented over three seasons of the MTV reality series. The band's debut album, Too Hot for TV, was released in September 2003 and in the Season Three finale, Diddy effectively dissolved the group when the project failed to deliver any bona fide hits. Sara Strokes is married to Tony Stokes and they have three children. MTV News reported that the former Da Band singer was arrested for allegedly stabbing her husband in an altercation at their Moreno Valley, California home in August of 2009. A mug shot showed Sara Stokes with bruises on her face and a bloodied nose, reportedly from falling while storming out of her house just after the alleged attack on her husband. 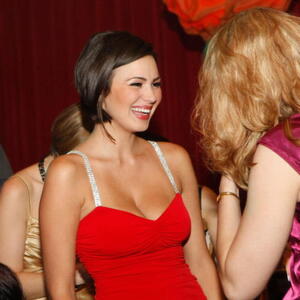