Sara Evans net worth: Sara Evans is an American country singer and songwriter who has a net worth of $16 million. Sara Lynn Evans was born in Boonville, Missouri in February 1971. At five years old Sara was singing in her family's band. She was hit by a car at eight and had to recuperate in a wheelchair.

She got a two year gig in a nightclub when she was 16. In 1991 she moved to Nashville, Tennessee, and then moved to Oregon in 1992 with her future husband Craig Schelske. She signed with RCA Nashville and released her debut Three Chords and the Truth in 1997. She released No Place That Far in 1998 and had a hit with the title track. The album was certified Gold. Her third album Born to Fly was released in 2000. The title song was a #1 hit on the Hot Country Songs chart. Born to Fly was certified double Platinum. She was the Video of the Year award and was nominated for six other awards by the Country Music Association in 2001. She released the albums Restless in 2003, Real Fine Place in 2005, Stronger in 2011, and Slow Me Down in 2014. She also had #1 singles with "Suds in the Bucket" and "A Real Fine Place to Start". She became the first country music singer on ABC's Dancing with the Stars in 2006. In 2008 she married Jay Barker. She has three children with former husband Schelske. 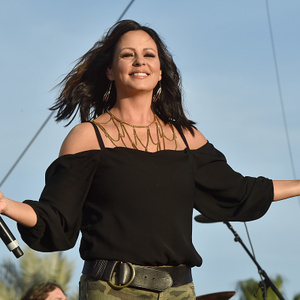