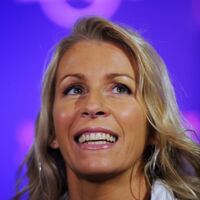 Sara Dallin net worth: Sara Dallin is an English singer and songwriter who has a net worth of $8 million. She is best known for being a founding member of the group Bananarama.

Sara Dallin was born in Bristol, England in December 1961. The vocal group Bananarama was formed in 1979. They released their debut studio album Deep Sea Skiving in 1983 which reached #7 in the UK. Bananarama released their self-titled album in 1984 which reached #9 in Switzerland. They released the album True Confessions in 1986 which reached #6 in Switzerland. Their album Wow! was released in 1987 and reached #1 in Australia. Bananarama also released the albums Pop Life, Please Yourself, Ultra Violet, Exotica, Drama, Viva, and In Stereo. Their hit singles include "Cruel Summer", "Venus", and more. The group has sold more than 30 million records and joined the Guinness Book of World Records for most UK chart entries by an all-female group. Sara Dallin had a child with former Bananarama dancer Bassey Walker. She studied journalism at the London College o Fashion before forming Bananarama with Siobhan Fahey.