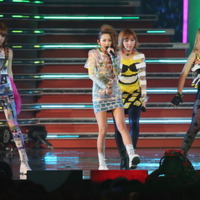 Sandara Park net worth: Sandara Park is a South Korean model, singer, actress, and dancer who has a net worth of $16 million dollars. Sandara Park was born in Busan, South Korea in November 1984. She is best known for being part of the South Korean girl group 2NE1. Park competed on the reality talent search TV program Star Circle Quest. She made the final ten contestants and then finished in second place behind Hero Angeles. She then joined Star Magic and starred in the movie Bcuz Of U in 2004. She won Best New Actress at the 21st Philippine Movie Press Club Star Awards. She starred with Angeles in Can This Be Love in 2005. Park has also starred in the films D' Lucky Ones, Super Noypi, and Girlfriends. She became a part of YG Entertainment's girl group 2NE1 in 2009. 2NE1 has released two albums in Korean and two in Japanese. They have had success with the singles "I Don't Care", "Go Away", "Lonely", and "I Am the Best". In 2009 Park became the first member of 2NE1 to release a digital single. Her song "Kiss" hit #5 on the Gaon Chart. In 2011 she was promoted to Communications Director for 2NE1. In 2012 she became an endorsement model for Etude House.