What was Sammy Davis, Jr.'s Net Worth?

Sammy Davis, Jr. was an American entertainer who had a net worth equal to $5 million at the time of his death in 1990. Sammy's net worth could have been much higher, but his financial situation wasn't aided by the fact that he was married three times and had four children. More importantly, at the time of his death, he was in debt to the Internal Revenue Service to the tune of $7 million (equal to $13 million after adjusting for inflation). Davis's estate was also the subject of many legal battles.

Known as "Mr. Show Business," Sammy was an accomplished singer, dancer, musician, actor, and impressionist who released dozens of albums and starred in more than 70 film and television projects. He earned a Tony nomination for Best Actor in a Musical for his performance in "Golden Boy" (1964) on Broadway and he appeared in notable films such as "Porgy and Bess" (1959), "Ocean's 11" (1960), and "The Cannonball Run" (1981). Sadly, Davis passed away from throat cancer in May 1990 at the age of 64.

Sammy Davis, Jr. was born Samuel George Davis, Jr. on December 8, 1925, in Harlem, New York City. His parents, Sammy Davis Sr. and Elvera Sanchez were both vaudeville dancers, and they split up when Sammy was 3 years old. Sammy Sr. got custody of his son, took him on tour, and taught him to dance, along with Will Mastin, who was Davis's godfather. Sammy, his father, and Mastin performed as the Will Mastin Trio, and when Davis was 7 years old, he landed the lead role in the 1933 film "Rufus Jones for President." Sammy was drafted into the military at 18, and he served in the Army during World War II. He suffered abuse at the hands of Southern white soldiers, resulting in his nose being broken numerous times. Davis ended up being reassigned to the Special Services branch and putting his talents to good use performing for the troops. By the time he was discharged in 1945, Sammy had achieved the rank of private and had been awarded a World War II Victory Medal and an American Campaign Medal.

In 1949, Davis recorded blues songs under the names Charlie Green and Shorty Muggins for Capitol Records, and when the Will Mastin Trio opened for Janis Paige at Ciro's in 1951, the star-studded audience loved Sammy's impressions, and he soon began to find success on his own. In 1955, he released his debut studio album, "Starring Sammy Davis Jr.," and the following year, he starred in "Mr. Wonderful" on Broadway. Davis became a member of the famed Rat Pack in 1959; Frank Sinatra was the leader of the pack, and Dean Martin, Peter Lawford, and Joey Bishop were also members. The Rat Pack performed in Las Vegas and made the 1960 film "Ocean's 11" together, followed by 1962's "Sergeants 3" and 1964's "Robin and the 7 Hoods." Davis starred in the 1959 special "Sammy's Parade" on Canadian television, and in 1964, he starred on Broadway in "Golden Boy" and filmed a daytime talk show.

In 1969, his song "I've Gotta Be Me" topped the Easy Listening singles chart, and he released the hit single "The Candy Man" in 1972. In the 1970s, Sammy guest-starred on several TV shows, including "All in the Family" (1972) and "Charlie's Angels" (1977), and his performance as Chip Warren on "One Life to Live" (1979) earned him a Daytime Emmy nomination. In 1985, Davis sponsored the Sammy Davis Jr. National Liver Institute at the University of Medicine and Dentistry of New Jersey after suffering from cirrhosis. He stated, "'I haven't had a drink for a year and a half because there's something kind of frightening when a doctor says, 'If you drink, you're going to die." In 1988, Sammy was supposed to go on tour with Frank Sinatra and Dean Martin, but Frank wasn't happy with Dean, who didn't seem that interested in performing, so Liza Minnelli replaced Martin on "The Ultimate Event." During the tour, Sammy was diagnosed with throat cancer and couldn't perform because of his treatments. Davis published his autobiography, "Yes I Can: The Story of Sammy Davis, Jr.," in 1965, and followed it with "Why Me?: The Sammy Davis, Jr. Story " in 1980. His third autobiography, "Sammy: The Autobiography of Sammy Davis, Jr.," was posthumously released in 2000. 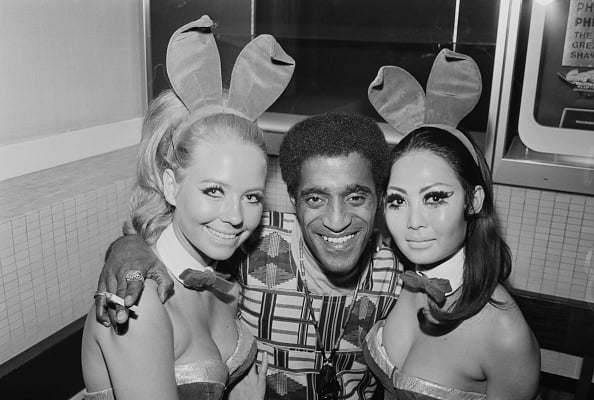 Sammy was in a relationship with actress Kim Novak in 1957, but the president of Columbia Pictures, Harry Cohn, was worried about racist backlash, and soon Davis was threatened by mobsters that were close to Cohn. Reportedly, in January 1958, mobster Mickey Cohen told Sammy's father that if "Davis didn't marry a black woman within 48 hours, he would take out his other eye and break both of his legs." Sammy offered singer Loray White (who he had previously dated) $25,000 to marry him, promising that they could dissolve the marriage after a year. They wed at the Sands Hotel in Las Vegas on January 10, 1958, and divorced in April 1959. Davis went on to wed Swedish-born actress May Britt on November 13, 1960, and they welcomed daughter Tracey on July 5, 1961, and adopted sons Mark (born 1960) and Jeff (born 1963) before divorcing in 1968 due to Sammy's affair with singer Lola Falana. After Davis and Britt split up, Sammy began abusing drugs and alcohol. He married dancer Altovise Gore on May 11, 1970, and they adopted son Manny (born 1978) in 1989.

In November 1954, Sammy lost his left eye in a car accident in San Bernardino, California. He wore an eye patch for six months before being fitted for a glass eye. Though Davis was raised by a Baptist father, he converted to Judaism in 1961. Sammy was a Democrat, but he became friends with Richard Nixon and endorsed him at the Republican National Convention in 1972. During the Vietnam War, he traveled to Vietnam to entertain the troops, and as a member of Nixon's Special Action Office For Drug Abuse Prevention, Davis also observed the military's drug rehabilitation programs. In 1973, Sammy and Altovise became the first African-Americans invited to sleep in the White House. Davis was involved in the Civil Rights Movement in the 1960s, taking part in the March on Washington in 1963 and helping to integrate nightclubs in Miami Beach and Las Vegas due to his refusal to perform at racially segregated venues.

In August 1989, Davis lost his ability to taste food and began feeling a tickle in his throat due to a cancerous tumor. Doctors recommended that he undergo a laryngectomy, but Sammy preferred to keep his voice, so he was treated with chemotherapy and radiation. After the cancer came back, his larynx was removed, but he passed away at his Beverly Hills home two months after the surgery on May 16, 1990. Davis was buried at Glendale's Forest Lawn Memorial Park near his father and Will Mastin, and two days after he died, the Las Vegas Strip's neon lights were dimmed for 10 minutes in his honor.

Sammy's estate was worth an estimated $4 million, and he left most of it to his widow. However, he owed $7 million to the IRS ($5.2 million plus interest and penalties), and since Altovise had co-signed Davis's tax returns, she was liable for his debt and had to auction off Sammy's real estate and possessions to raise the money. Altovise reached a settlement with the IRS in 1997, and after her death in 2009, their son Manny became the estate's executor as well as the majority-rights holder of his father's creative works.

In the 1970s, Sammy bought a 1.25-acre property in Beverly Hills that featured an 11,000 square-foot home plus guest house. He lived there until his death. Roughly six months after his death, his family placed this mansion up for sale for $4.25 million. Here's a video tour of the home from a recent sale:

Davis earned a posthumous Grammy Lifetime Achievement Award in 2001, and "What Kind of Fool Am I?" was inducted into the Grammy Hall of Fame in 2002. He also earned nominations for Male Solo Vocal Performance and Record of the Year for "What Kind of Fool Am I?" in 1962 and Pop Male Vocalist for "Candy Man" in 1972. "Sammy Davis Jr.'s 60th Anniversary Celebration" won an Emmy for Outstanding Variety, Music or Comedy in 1990, and he received nominations for "The Swinging World of Sammy Davis Jr.," "One Life to Live," and "The Cosby Show." The American Guild of Variety Artists named Sammy Man of the Year in 1961, and he received the NAACP Spingarn Medal Award in 1968. He received a Special Citation Award from the National Academy of Television Arts and Sciences in 1974 and a star on the Hollywood Walk of Fame in 1960. Davis received a Kennedy Center Honor in 1987, and he was inducted into the NAACP Image Awards Hall of Fame (1989), the Las Vegas Walk of Stars (2006), the International Civil Rights Walk of Fame (2008), and the National Rhythm & Blues Hall of Fame (2017). In 1981, Sammy received an Honorary Doctorate in Literature from Atlanta University. 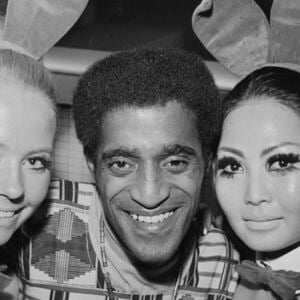