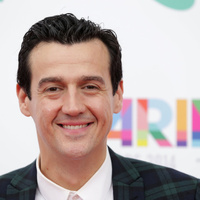 Sam Moran net worth: Sam Moran is an Australian entertainer who has a net worth of $20 million. Sam Moran earned his net worth as a performing artist. He is best known for being a member of the children's band The Wiggles. He studied classical voice and music education at the Sydney Conservatorium of Music with the purpose of becoming a high school music teacher. He has appeared as a vocalist in 'Haste to the Wedding', John Field's Australian musical 'Evie & the Birdman' and was cast as Jinx in the Australian premiere of 'Forever Plaid.' He began performing with The Wiggles in 1998, hosting and touring with the "Dorothy the Dinosaur Show" throughout Australia and New Zealand. In 2002, he became Greg Page's understudy and filled in for Page over 150 times. He reported that he was asked to permanently join The Wiggles "a couple of days" before Page announced his retirement in November 2006. He has won four ARIA Awards with "The Wiggles" for the CD recordings of "Pop Go The Wiggles" (2007), "You Make Me Feel Like Dancing" (2008), "The Wiggles Go Bananas" (2009) & "Let's Eat" (2010). He appeared on the celebrity version of "Are You Smart Than 5th Grader", he won $150,000 for UNICEF. He is a Goodwill Ambassador for UNICEF. He released his first solo album, The Colour of Love, through Sony Music Australia in 2010. Recently has been appearing as Professor Singalottasonga and Dapper Dave in the TV series. He is married to Lyn Stuckey, which he met when appearing together on the "Dorothy the Dinosaur Show". The couple's first child was born January 2010 in Sydney. He is also a "keen cook" and a fan of the Australian Football League team the Sydney Swans. Sam Moran was born on April 8th, 1978 in New South Wales, Australia. He was born in Sydney and raised in Wagga Wagga.