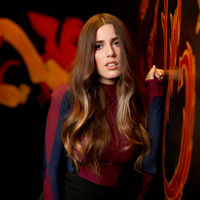 Ryn Weaver net worth: Ryn Weaver is a singer who has a net worth of $250 thousand dollars. Ryn Weaver is best known for her song "OctaHate" that she uploaded to SoundCloud in June 2014. The song was produced by Cashmere Cat, Benny Blanco, and Passion Pit's Michael Angelakos and was co-written by Ryn and Charli XCX. The song had over 30,000 plays on its first day and hit a million within the first two weeks. "OctaHate" is from Weaver's Promises EP. The singer previously went by her real name Aryn Wuthrich and appeared on the song "With Me" by Cashmere Cat. Weaver also posted a cover of the Joanna Newson song "Peach, Plum, Pear" under the name FemFemFem. She is a part of online writing groups and has acted in a musical short film The Bright Side which was nominated for a Student Emmy Award. Weaver signed with indie label Friends Keep Secrets. She is based out of New York and Los Angeles, CA. She is a self-taught producer but does not play any instruments. The song "OctaHate" has been tweeted by Hayley Williams of Paramore and Tom Krell from How to Dress Well.