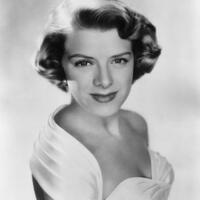 Rosemary Clooney net worth: Rosemary Clooney was an American singer and actress who had a net worth of $20 million at the time of her death in 2002. Rosemary Clooney was born in Maysville, Kentucky in May 1928 and passed away in June 2002. She was a pop and jazz vocalist who released many albums and singles. Clooney had #1 hits on the Billboard Hot 100 chart with the singles "Come On-a My House", "Half As Much", "Hey There", and "This Old House" and her single "Mambo Italiano" reached #1 in the UK. As an actress she starred in several films and TV series including Slaughter Trail, The Stars Are Singing, Here Come the Girls, Red Garters, White Christmas, Frasier, Radioland Murders, ER, and more. Clooney struggled with depression and drug addiction which negatively impacted her career. She was married to Jose Ferrer twice and to Dante DiPaolo and had five children including Miguel and Rafael Ferrer. Miguel Ferrer is an well-known actor. Rosemary was the aunt of George Clooney. George famously lived with Rosemary when he first moved to Hollywood to launch his career. She was nominated for three Primetime Emmy Awards. Rosemary Clooney passed away on June 29, 2002 at 74 years old from lung cancer.