Rory Feek net worth: Rory Feek is an American country music singer and songwriter who has a net worth of $3 million. Rory Feek was born in Atchinson, Kansas. He has written songs for artists such as Clay Walker, Tracy Byrd, and Blake Shelton. Feek established Giantslayer Records to help new independent artists. Rory Feek is best known for being one half of the duo Joey + Rory with his wife Joey Feek. The duo finished as a third place finalist on the CMT competition Can You Duet in 2008. The pair signed to Sugar Hill/Vanguard Records in 2008. Their debut studio album The Life of a Song was released in 2008 and reached #10 on the US Country chart and #61 on the Billboard 200 chart. Their second album Album Number Two was released in 2010 and achieved similar success. Joey + Rory released the albums His and Hers in 2012, Inspired: Songs of Faith & Family in 2013, Made to Last in 2013, and Country Classics: A Tapestry of Our Musical Heritage in 2014. In 2011 they also released the album A Farmhouse Christmas. Joey + Rory have had some success with their singles "Cheater, Cheater" and "That's Important to Me". In 2010 the duo won an Academy of Country Music Award for Top New Vocal Duo of the Year.

Unfortunately, Joey Feek died on March 4, 2016 at the age of 40 after suffering a battle with cancer. 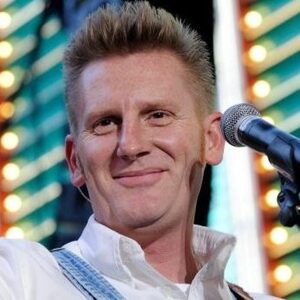