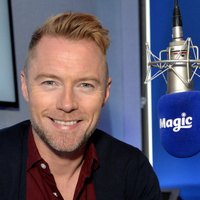 Ronan Keating net worth: Ronan Keating is an Irish recording artist, singer-songwriter, musician and philanthropist who has a net worth of $30 million. Ronan Keating has earned his net worth as lead singer from the group as Boyzone from 1994-1999, as well as a successful solo career. Since going out on his own in 2000 Ronan has recorded 9 studio albums, and he gained worldwide attention when his single "When You Say nothing at All" peaked at number one in several countries, the song was featured in the film Notting Hill. He recorded the song in 1999, while still a member of Boyzone. Keating has sold over 22 million solo records worldwide, and along with Keith Duffy, Mikey Graham, Shane Lynch and Stephen Gately of Boyance has sold over 40 million records worldwide. He is a judge in Australia on The X-Factor; he has also worked for the Marie Keating Foundation that raises awareness for breast cancer. The foundation is named after his mother who died from the disease. Ronan Keating was born on 3 March 1977, to Gerry Keating a lorry driver and his mother Marie was a hairdresser who owned her own salon in Dunshaughlin, Co. He is the youngest of five children; they grew up on the Northside of Dublin and Co Meath. He has been very active in charily work including joining Christian Aid in October 2005, and the Trade Justice Campaign in 2004, Keating went to Rome where he was appointed as a UN Goodwill Ambassador via the Food and Agricultural Organization. Keating married model Yvonne Connolly in April 1998 and together, the couple has three children. Over the years he has won numerous awards including the Smash Hits Best Solo Male, and a World Music Award for the best selling Irish artist. For his performance for The Prince's Trust in London he was given a tree in Hyde Park.