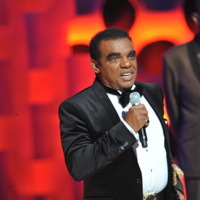 Ronald Isley Net Worth: Ron Isley is an American singer, songwriter and occasional actor who has a net worth of $2 million dollars. Born May 21, 1941 in Cincinnati, Ohio, Ronald Isley is best known as the lead singer and founding member of the family music group The Isley Brothers. The third of six brothers, Ron Isley began his career in church. At the age of three he won a $25 war bond for signing at a spiritual contest at the Union Baptist Church. By age seven he was signing at such venues as The Regal Theatre in Chicago, Illinois, alongside Dinah Washington and other notables. Early in his teens he was singing regularly with his brothers in church tours. In 1957, sixteen-year-old Ron Isley and his two elder brothers, O'Kelly (19) and Rudy (18), moved to New York where they recorded doo-wop for local labels before landing a major record deal with RCA Records in 1959. After the death of brother O'Kelly in 1986 and Rudy's exit from the group, to enter the ministry, Ron carried on with the Isley Brothers' name as a solo artist as well as participating in performances with the remaining brothers. In 1990, Ron scored a top-ten duet with Rod Stewart with a remake of The Isley Brothers' hit This Old Heart of Mine (Is Weak for You). In 2003, Ron recorded a solo album, Here I am: Bacharach Meets Isley, with famed composer/songwriter Burt Bacharach. In the mid-2000s, Isley was convicted of tax evasion and subsequently imprisoned in Terre Haute, Indiana. He was released in 2010 and his $303,411 tax debt (lien) earned him the title as one of California's most delinquent taxpayers.