Robyn New Worth: Robyn is an a Swedish recording artist who has a net worth of $10 million. Robin Miriam Carlsson (aka Robyn) was born June 12, 1979 in Stockholm, Sweden. Robyn first came into public notice in the late '90s for her worldwide dance-pop hit Do You Know (What It Takes) from her debut album Robyn Is Here (1997). The popularity of her U.K. No. 1 song With Every Heartbeat and subsequent international album release Robyn (2005) in 2007 brought her mainstream success. Robyn recorded the first of a trilogy of albums to be released over the course of 2010 titled Body Talk Pt. 1 in June of that year, which peaked at No 1. The album's lead single Dancing on My Own was released a few weeks prior to the album's release and became a hit single worldwide, earning her a Grammy Award nomination for the category of Best Dance Recording in 2011. A follow-up album, Body Talk Pt. 2, was released in September, entering at No. 1 on the Swedish charts and the final album of the trilogy, Body Talk, was released in November 2010 with lead single Indestructible. Call Your Girlfriend was the second single to be released from Body Talk. After spending a couple of years touring with acts such as Katy Perry and Coldplay, and collaborating with the Lonely Island and Snoop Dogg, Robyn returned with new material in 2014. A collaboration with longtime friends Röyksopp, the Do It Again mini-album blended the best elements of both artists' music. Between 1999 and 2013, Robyn took home 14 music awards and was nominated for an additional 15. She was engaged to mixed martial artist and artist Olof Inger until 2011. She went on to become engaged to videographer Max Vitali, referring to him in a 2013 interview with Collection Of Style magazine as her fiancé. 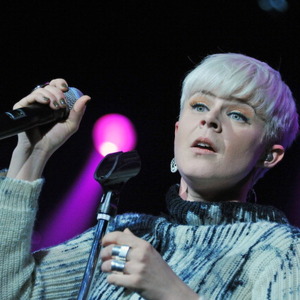