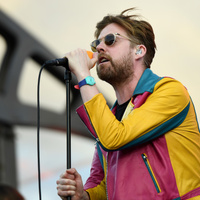 Ricky Wilson net worth: Ricky Wilson is a British singer who has a net worth of $10 million dollars. Ricky Wilson was born in Keighley, West Yorkshire, England, and began his performance career with the group Runston Parva, also known simply as Parva. In 1996, Parva remade themselves as the Kaiser Chiefs. The group, and Ricky Wilson in particular, became known for their entertaining and energetic live performances, and for their natty style. They have recorded a number of hit songs, including "Ruby", "Never Miss a Beat", "I Predict a Riot", and "Oh My God", and their fifth studio album is slated for release in early 2014. In addition to working with the Kaiser Chiefs, Ricky Wilson has also appeared on "Never Mind the Buzzcocks", "Shooting Stars", and "Peter Kay's Britain's Got the Pop Factor… and Possibly a New Celebrity Jesus Christ Soapstar Superstar Strictly on Ice". He recently became a judge/mentor on "The Voice UK".