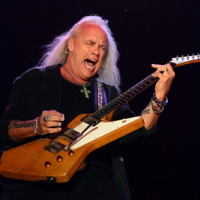 Rickey Medlocke net worth: Rickey Medlocke is an American musician who has a net worth of $3 million dollars. Rickey Medlocke was born in Jacksonville, Florida and began his performance career while he was still in diapers, playing the miniature banjo when he was three. He taught himself to play the guitar when he was five, and began playing drums in his grandfather's blues band when he was eight. He went on to teach himself multiple instruments, including the mandolin, dobro, and keyboards. He formed his own band, Blackfoot, when he was eighteen. A childhood friend of the members of Lynyrd Skynyrd, he guest-recorded on a number of their tracks, supplying instrumentation and/or vocals on such songs as, "One More Time', "Preacher's Daughter", and "Wino", among others. He performed with Blackfoot throughout the 70s, 80s, and early 90s. In 1996, he was invited to join Lynyrd Skynyrd as a full member of the band.