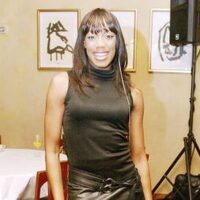 Rhona Bennett net worth: Rhona Bennett is an American actress, singer, and model who has a net worth of $4 million dollars. Rhona Bennett was born in Chicago, Illinois, and began her professional performance career as a Mousketeer in the early 90s. She appeared on "The New Mickey Mouse Club" and its spinoff, "Emerald Cove". From there, she went on to guest starring roles on multiple shows, including "Martin", "Living Single", and "Homeboys in Outer Space". She became a household name when she was cast as Nicole on "The Jamie Foxx Show". In 2001, she released her first album, "Rhona", which spawned a #1 dance hit. In 2003, she joined the popular girl-group, En Vogue, and remained with the group for five years. She left, after original member, Renee Robinson, returned in 2008. She performed with En Vogue during their reunion tour during the summer of 2012, and is currently working on a second solo album.