Reba McEntire net worth: Reba McEntire is an American country music singer, songwriter, producer and actress who has a net worth of $95 million dollars. To date, Reba has sold more than 90 million records globally. As an actress she has starred in several movies and most notably her own show "Reba" from 2001 to 2007. To date she has released 16 #1 albums, more than any other female country artist.

Early Life: Reba McEntire was born in 1955 in Kiowa, Oklahoma, where she got her start performing on the rodeo circuit as a teenager. Reba initially entered Southeastern Oklahoma University with the goal of eventually becoming an elementary school teacher. Outside of school she sang at local venues. One night during her sophomore year she sang the National Anthem at the National Rodeo in Oklahoma City. Thanks to the performance Reba was discovered by country artist Red Steagall who was extremely impressed by her vocal abilities. Red brought Reba to Nashville, Tennessee in 197 where she recorded a demo tape. After hearing the demo tape, Reba was signed to Mercury Records.

She actually went back to school and finished her degree, graduating in December 1976. Just one month later she was back in Nashville recording songs for a future debut album. Her first single was somewhat disappointing, peaking at #88 on the Billboard country chart.

Reba released her self-titled debut solo album in August 1977. It was not commercial success. Her second album, 1979's "Out of a Dream" featured a cover of Patsy Cline's "Sweet Dreams" which was a top 20 hit.

Success: Reba McEntire achieved breakthrough success in the early 80s, crossing over from country to pop with a series of number one singles in the 1980s and 1990s including: "How Blue", "Somebody Should Leave", "New Fool at an Old Game", "I Know How He Feels", "The Heart Won't Lie, "Does He Love You", "Till You Love Me", and "The Heart Is a Lonely Hunter". By the mid 1980s, nearly every album Reba released was going multi-platinum. Her 1993 greatest hits compilation album sold more than 5 million copies.

McEntire has won an unprecedented 90 awards from various sources and been nominated for nearly 200. McEntire was awarded a star on the Hollywood Walk of Fame for Recording in 1998 for Recording at 7018 Hollywood Blvd. In 2006 she was inducted into the Music City Walk of Fame.

Acting Career: In 1990, Reba started to dip her toes into the acting world. She would go on to appear in a number of films, Broadway shows, and television series. She made her acting debut in 1990's "Tremors" and then went on to star in the Broadway revival of "Annie Get Your Gun".

Reba's self-titled TV series debuted on the WB network in October 2001. The show aired 127 episodes over six seasons before completing its run on The CW in February 2007. Reba was nominated for Golden Globe Award for Best Performance by an Actress in a Television Series–Musical or Comedy.

Personal Life: Reba has been married twice. Her first marriage to steer wrestling champion Charlie Battles, lasted from 1976 to 1987. In 1989, Reba married her manager Narvel Blackstock. They divorced in 2015. Through her marriage to Narvel, Reba became step-mother to his three children; Chassida, Shawna and Brandon. Brandon Blackstock married singer Kelly Clarkson in 2013. Reba and Narvel had a child of their own, a son named Shelby Blackstock. Shelby is a race car driver.

Real Estate: In 2003, Reba and Narvel spent $9 million to buy a 2-acre property in Beverly Hills. In 2015, around the time of their divorce, they sold the property – which features a 9,000 square-foot mansion – for $22.5 million. They also owned an 80-acre farm called Starstruck Farm in Gallatin, Tennessee, 30 minutes northeast of Nashville. The property features an 12,800 square-foot lakefront house, large pool, pool house, equestrian facilities and tennis courts. In September 2016 they listed the home for $7.9 million. It languished on the market until July 2017 when it sold for $5 million to a developer. 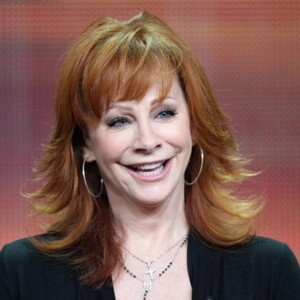