Rascal Flatts net worth: Rascal Flatts is an American country pop music group who has a net worth of $180 million. Rascal Flatts consists of Gary LeVox, Jay DeMarcus, and Joe Don Rooney. Rascal Flatts formed in 1999. The group has released nine studio albums and have had 26 singles reach the Top 20 on the Billboard Hot Country Songs chart.

Rascal Flatts has had 12 #1 singles on the Billboard Hot Country Songs and/or Country Airplay charts including "These Days", "Mayberry", "Fast Cars and Freedom", "What Hurts the Most", "My Wish", "Stand", "Take Me There", "Here", "Here Comes Goodbye", "Why Wait", and "Banjo". Their cover of "Bless the Broken Road" was #1 for five weeks in a row. The group won a Grammy Award and countless other awards including Academy of Country Music, Country Music Association, Billboard Awards, and People's Choice. In 2012 the band received a star on the Hollywood Walk of Fame. The group has appeared in episodes of the TV series Yes, Dear, CSI, and West Coast Customs. They appeared in the film Hannah Montana: The Movie and in a Hershey Chocolate commercial. 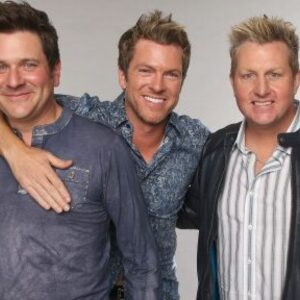