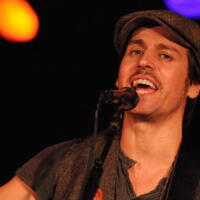 Raine Maida net worth: Raine Maida is a Canadian musician who has a net worth of $3 million. Raine Maida has earned his net worth as lead vocalist and primary songwriter for the alternative rock band Our Lady Peace. His unique countertenor nasal falsetto singing voice has become well-known as have his cryptic and poetry-influenced song lyrics. Occasionally while performing with the band Our Lady Peace, he plays the acoustic guitar. Raine was born on February 18, 1970 in Weston, Ontario. He attended Ridley College in St. Catharines, and later studied criminology at the University of Toronto. He started his solo career in 2006, and then in 2007 he released his debut solo album titled The Hunters Lullaby. Maida was responsible for the production of the seventh album released by Our Lady Peace. He married Canadian singer Chantal Kreviazuk in 1999, and they have three sons. Maida was intimately involved with War Child, as well as many other charities since 2003, and was an outspoken critic of both the Iraq War and former U.S. president George W. Bush. Maida is a founding member of the Canadian rock band Our Lady Peace, as well as lead vocalist, he and band guitarist Mike Turner started the group in 1992. At the beginning of his solo career Maida released a four song EP called Love Hope Hero on November 14, 2006. This EP contained the songs "One Second Chance", "Earthless", "Sex Love and Honey", and "Careful What You Wish For". He sold this EP on his website, on iTunes, and during tours with Chantal Kreviazuk. His first solo album The Hunters Lullaby was recorded in his own studio, and featured his wife Chantal singing and playing the piano on several songs. The album was released on November 13, 2007 by independent label Kingnoise Records. He himself describes this first album as "a collection of poems put to music".