Peter Cetera net worth: Peter Cetera is an American singer, songwriter, musician, and producer who has a net worth of $40 million dollars. He is best known for being a founding member of the band Chicago, and then later forging a successful solo career.

Early Life: Peter Cetera was born and raised in Chicago, Illinois, on September 13, 1944, the second of six children. He began playing the accordion when he was eleven years old and around this time he realized he also had a talent for singing. He then bought himself an acoustic guitar when he was in his early teens. He began playing the electric bass soon after that. It was during high school that Peter considered seriously pursuing a career as a singer. Cetera graduated from Mendel Catholic Prep High School in 1962, and is listed among the "Notable Alumni" of the school.

Chicago: In his late teens, he began to perform with various bands in Chicago, and went on to tour and release two albums with the rock group, The Exceptions. In 1967, he saw a band called The Big Thing. The group played rock music, but also used an extensive horn section. He found the combination fascinating, and subsequently left The Exceptions to perform with The Big Thing. The Big Thing later changed their name to The Chicago Transit Authority. This was later shortened to just, Chicago, and the group went on to become one of the most successful bands of all time. Their first self-titled debut album was released in 1969. Cetera shared lead vocals on three out of the eleven tracks on the album. Their follow-up album, "Chicago" catapulted the band to popularity around the world. The song "26 or 4 to 6" was the first major hit single with Cetera singing vocals.

During the '70s, Cetera became a prolific songwriter for the group and continued to write hit songs for them. His biggest singing and songwriting accomplishment with the band came in 1976 with the song "If You Leave Me Now", on Chicago's tenth album, which garnered the band their very first Grammy Award, and it was also the group's first number one single. Another success followed with Cetera's composition of 1977's "Baby, What a Big Surprise" from Chicago XI. He was featured on the lead vocals and the track reached No. 4 on the record charts. With the rise of disco music by the end of the 1970s, Chicago's popularity had declined, culminating in the release of the band's poorest selling album up to that point, "Chicago XIV". It peaked at No. 71 on the Billboard 200 chart. In 1982,

Cetera released his first solo album, "Peter Cetera" on Warner Bros. Records in 1981. It was considered a commercial failure. In 1982, Chicago made a big comeback when "Chicago 16" peaked at No. 9 on the Billboard 200 chart. Leading the way was a hit single co-written by Cetera, "Hard to Say I'm Sorry," which went to No. 1 on the charts and was certified Gold. It was also nominated for a Grammy and featured in the movie "Summer Lovers" starring Daryl Hannah. When "Chicago 17" was released in 1984, it became the band's most successful selling album in their history, selling over six million copies in the U.S. alone. All four hit singles from the album were sung by Cetera, including three he co-wrote, and all four songs charted in the top 20. With the rise of MTV and the advent of the music video, Cetera became the face and public leader of the long-time faceless band. With his sudden popularity, he decided to leave Chicago and set to work on recording a second solo album. During his time with Chicago, he recorded 17 studio albums with them.

Solo Career: His first single after leaving Chicago was "Glory of Love," which was used as the theme song for the film "The Karate Kid Part II." It became a No. 1 hit on the Billboard Hot 100 in 1986 and achieved similar success worldwide. The song was nominated for an Academy Award as well as a Golden Globe in the category of Best Original Song, along with a Grammy nomination. By February of that year, he won the American Video Award for Best New Artist. The song was included on his second solo album, 1986's successful Gold and Platinum certified  "Solitude/Solitaire." He released his third solo album, "One More Story," in 1988. In 1992, he released "World Falling Down," which had three successful singles including "Restless Heart." 1995 saw the release of the album "One Clear Voice," and afterward Cetera launched his first solo tour that lasted until 1996. Cetera released a collection of his duets from over the years in 1997, "You're the Inspiration: A Collection."

Cetera went on to release two more albums, "Another Perfect World" in 2001 and "You Just Gotta Love Christmas" in 2004. In 2010, Cetera formed a new band called "The Bad Daddies," an electric rock band that performs both original material and covers of popular songs, as well as material from Chicago and Cetera's solo career. He continued to collaborate on duets and compositions with many other artists until his retirement in 2019, and has appeared on dozens of film soundtracks. During his solo career, Catera scored six Top 40 singles. Cetera was inducted into the Rock and Roll Hall of Fame as a member of Chicago in April 2016.

Outside of his sprawling music career, Cetera appeared in two movies, "Electra Glide in Blue" in 1973, and "Memories of Midnight" in 1991.

Personal Life:  Cetera was married to Janice Sheely from 1968-1973. In 1972, he began a relationship with Diane Nini. They married in 1982 and had a daughter, Claire, together. The couple divorced in 1991. In 1997, Catera had a second daughter named Senna with then-girlfriend Blythe Weber. Cetera has resided in Idaho since the mid 1980s. 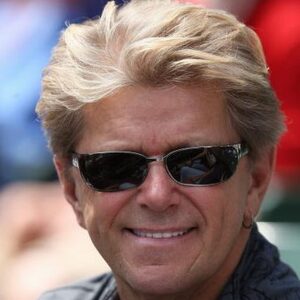