Perrie Edwards net worth: Perrie Edwards is a British singer who has a net worth of $9 million. She is best-known for being a member of the singing group Little Mix.

Perrie Edwards was born in South Shields, England in July 1993. She auditioned as a solo singer on the reality television series The X Factor UK in 2011 at 17 years old. Edwards joined the girl group Little Mix which would go on to win The X Factor. Perrie dated Zayn Malik from One Direction between 2012 and 2015.

She received a BTEC in Performing Arts from Newcastle College. Little Mix signed with Simon Cowell's record label Syco Music. Their debut studio album DNA was released in 2012 and reached the Top 10 in the UK, Australia, Canada, Ireland, Norway, Sweden, and the United States. Their 2013 album Salute also reached the Top 10 in six countries. Their singles "Cannonball" and "Wings" went to #1 in the UK, Ireland, and Scotland. As of this writing the group has sold more than 50 million records worldwide. They became the first girl group to reach the Top 5 in the U.S. with their debut album since The Pussycat Dolls. 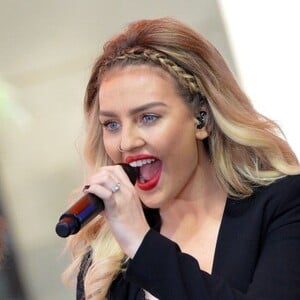