Pepe Aguilar Net Worth: Pepe Aguilar is an American-born Mexican singer-songwriter and actor who has a net worth of $10 million. Pepe Aguilar was born in San Antonio, Texas in August 1968. Aguilar sings mariachi, pop, and ranchera styles. Pepe is the son of music and film stars Antonio Aguilar and Flor Silvestre.

Pepe was part of the rock band Equs as a teenager. His debut album Pepe Aguilar Con Tambora was released in 1991. He has released a total of 28 studio albums and his live album MTV Unplugged was released in 2014. In the 1990s he became a producer and produced songs for Julieta Vengeas and Lupita D'Alessio. His 1998 album Por Mujeres Como Tu was on the Billboard chart for 52 weeks and sold two million copies. His 1999 album Por Una Mujer Bonita won a Latin Grammy. All together Aguilar has been nominated for nine Grammy Awards. He became the first singer of Mexican descent to sing at the legendary Hollywood Bowl in California in 2002. He was also the first to sing at the Kodak Theater and received the keys to Los Angeles. He launched his Pepe Aguilar Signature Collection in 2009. In 2012 Aguilar received a star on the Hollywood Walk of Fame at 7060 Hollywood Blvd. next to his father Antonio's star. 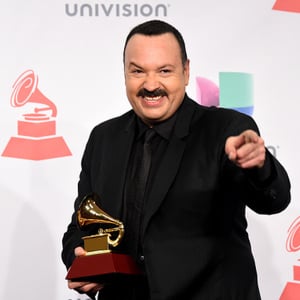