Paul Revere Net Worth: Paul Revere was an American musician who had a net worth of $5 million. He is best known for being the founder and organ player for Paul Revere & the Raiders.  In his early 20s, Revere owned several restaurants in Caldwell, Idaho.  He first met singer Mark Lindsay while picking up hamburger buns from the bakery where Lindsay worked and the pair began to form the band.

Lindsay joined Revere's band in 1958. Originally called the Downbeats, they changed their name to Paul Revere & the Raiders in 1960 on the eve of their first record release for Gardena Records. Their single "Like, Long Hair" hit #8 on the Billboard chart in 1961. The band dressed in Revolutionary War like outfits. Paul grew his hair and put it into a ponytail which became his signature look. Revere became on the America's teen idols of the 1960s and was affectionately referred to as "The Madman of Rock & Roll. Their most popular songs include "Kicks" which was #400 on Rolling Stone's 500 Greatest Songs of All Time, "Hungry", "Him Or Me – What's It Gonna Be?", and their Platinum #1 single "Indian Reservation (The Lament of the Cherokee Reservation Indian)". The band released a total of 14 studio albums with three making the Top 10. After the band he would go on to release a total of 14 more solo albums. Revere also had a number of production credits. Revere and the Raiders were inducted into the Oregon Music Hall of Fame in 2007 and into the Hit Parade Hall of Fame in 2010. In 2014, Paul Revere passed away after an 18-month battle with brain cancer. More than 500 people attended the service, including family members, former bandmates and fans of Paul Revere and the Raiders. 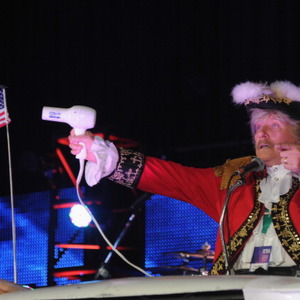 Paul Revere and The Raiders