Patty Loveless net worth: Patty Loveless is an American country music singer who has a net worth of $14 million dollars. Patty Loveless was born Patty Lee Ramey in Pikeville, Kentucky in January 1957. Her older sister Dottie was an aspiring country singer and performed with her brother Roger as the Swinging Rameys.

After Dottie got married and quit performing Patty had her change. She and her brother were now known as the Singin' Swingin' Rameys. Roger took Patty to Nashville, Tennessee in 1971 after he started working as a producer. After singing for Porter Wagoner Patty was introduced to Dolly Parton. The Rameys appeared on a touring Grand Ole Opry show in 1973 when one of the performers was not able to make it. From 1973 to 1975 Patty traveled and performed with the Wilburn Brothers. She became their full time lead singer after she graduated high school. In 1986 she released her debut self-titled album. She is one of the most popular neotraditional country singers and also includes country pop and bluegrass styles. Loveless has released 14 studio albums and had has over 40 singles make it onto the Billboard Hot Country Songs chart. She has also had five #1 hits: "Timber, I'm Falling in Love", "Chains", "Blame it on Your Heart", "You Can Feel Bad", and "Lonely Too Long". She became a member of the Grand Ole Opry in 1988. She got her last name Loveless from her first marriage to Terry Lovelace, and is now married to her producer Emory Gordy, Jr. Patty has won two Grammy Awards, an American Music Award, and three Country Music Association Awards. In 2005 she was inducted into the Georgia Music Hall of Fame, and in 2011 into the Kentucky Music Hall of Fame. 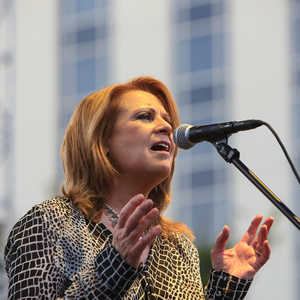