Patti Smith net worth: Patti Smith is an American musician and visual artist who has a net worth of $16 million. Born in Chicago, Illinois, Patti Smith grew up in Deptford Township, New Jersey. She went on to attend Deptford Town High School in the mid-60s, and then went to work in a factory immediately after graduation. She dropped out of Glassboro State College three years later, and moved to New York City, where she struggled financially for the next few years. She moved to Paris in 1969, and made her living busking and doing performance art. After returning to the US, she became heavily involved in New York's poetry scene, and also began to write songs for multiple bands, including Blue Oyster Cult. She also wrote articles for such publications as Creem and Rolling Stone. She began performing as a rock artist in the mid-70s, and in 1975, The Patti Smith Group signed with Arista Records. She went on to release four albums with the group, and has since released seven more albums as a solo artist. She has also published 12 books, and has contributed songs and performances to other artists' albums. 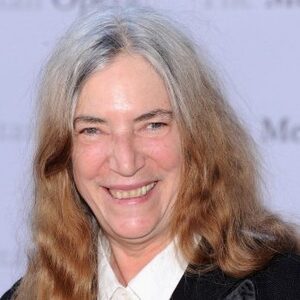