What is Pat Boone's Net Worth?

Pat Boone is a singer, composer, actor, author, and television personality who has a net worth of $50 million. Pat Boone was one of the most successful recording artists of the 50s and early 60s. He also earned recognition for hosting the ABC variety television series "The Pat Boone Chevy Showroom," and for starring in numerous Hollywood films. In the 70s, Boone turned increasingly toward a focus on Christian values and gospel music, and later became a conservative political commentator. During his music career he sold over 45 million albums. He had 38 Top 40 hits. Boone also founded a record label named Lion & Lamb Records, which he founded in the early 1970's.

Boone launched his music career performing in Centennial Park in Nashville. He started recording in 1953, and in 1955, had his first substantial hit with a cover of Fats Domino's "Ain't That a Shame." Boone continued to find commercial success covering songs by black artists. In the late 50s, he had hits with his covers of "Tra La La-a," "Two Hearts Two Kisses," "I Almost Lost My Mind," "Tutti Frutti," "Long Tall Sally," and "Don't Forbid Me," among others.

In 1956, Boone released his first two albums: the self-titled "Pat Boone," which was a compilation of previously released singles, and "Howdy!," which was his official debut. The next year, he released a total of five albums, including "A Closer Walk with Thee" and "Four by Pat," the latter of which made it to number five on the Billboard charts. In 1958, Boone had his highest-charting album with "Stardust," which peaked at number two. He had subsequent successful albums with "Yes Indeed!," "Tenderly," "Moonglow," and "Moody River."

Boone began focusing on gospel music in the 60s, releasing such albums as "My God and I," "The Lord's Prayer and Other Great Hymns," and "Blest Be Thy Name." He continued to release studio and compilation albums over the subsequent decades, most with a Christian emphasis. One notable exception was his 1997 album "In a Metal Mood: No More Mr. Nice Guy," which featured covers of famous hard rock and metal songs in a big band style. Although Boone's older fans were largely bewildered or outraged by the album, "In a Metal Mood" was the singer's most commercially successful album in over 30 years. 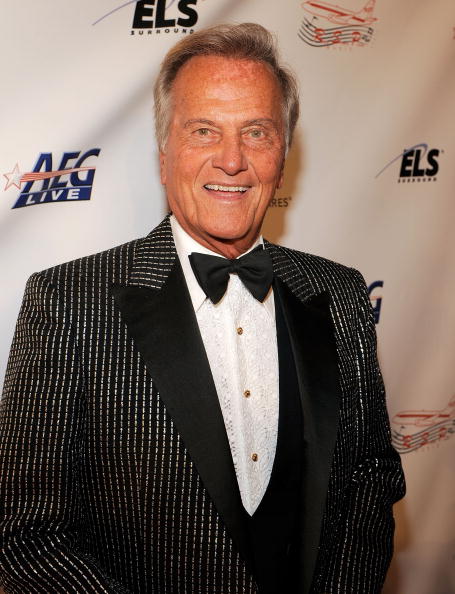 Boone first made his mark on television in the late 50s as a regular guest on the ABC program "Ozark Jubilee," which was hosted by his father-in-law. His wholesome, anodyne image on the air landed him a longterm endorsement deal with General Motors. Boone also made regular appearances on the CBS variety show "Arthur Godfrey and His Friends." At the age of 23 in 1957, he began hosting his own variety show on ABC entitled "The Pat Boone Chevy Showroom." The program, which ran through 1960, featured appearances from such musical artists as Pearl Bailey, Johnny Mathis, and Edie Adams. Among his other notable television gigs, Boone hosted the documentary "Salute to the Teenagers."

On the big screen, Boone made his acting debut as the star of the 1957 musical film "Bernardine." The same year, he had a bigger hit with the musical "April Love," a remake of the 1944 film "Home in Indiana." The film costarred Shirley Jones and featured an Academy Award-nominated title song sung by Boone. Following this, Boone starred in the musical comedy "Mardi Gras." In 1959, he had one of his greatest commercial hits with the science-fiction adventure film "Journey to the Center of the Earth," based on the eponymous Jules Verne novel. Boone subsequently starred in "All Hands on Deck," "State Fair," "The Main Attraction," "The Horror of it All," "The Yellow Canary," "Never Put it in Writing," and "Goodbye Charlie." In the late 60s, Boone starred in "The Perils of Pauline." He would have his last starring role for a long time in 1970, when he acted opposite Erik Estrada in the crime film "The Cross and the Switchblade." Boone didn't return to film acting until 2016; that year, he appeared in the Christian drama "God's Not Dead 2." The following year, he was in "A Cowgirl's Story."

Boone achieved success as an author with his very first book in 1958, the number-one bestseller "'Twixt Twelve and Twenty: Pat Talks to Teenagers." He went on to publish a plethora of further books over the next six decades, most focused on Christianity. Titles include "A Miracle Saved My Family," "Joy!," "Pray to Win," "Jesus is Alive," and "Pat Boone Devotional Book."

Having grown up in the Church of Christ, Boone is deeply religious. In 1964, he spoke at a huge conservative rally in Los Angeles promoting mandatory prayer in schools. Later, in the early 70s, Boone hosted Bible studies for various celebrities.

At the age of 19 in 1953, Boone married Shirley Lee Foley, the daughter of country music star Red Foley and singer Judy Martin. Together, the couple had four daughters named Cheryl, Linda, Deborah, and Laura. In 2019, Foley passed away at the age of 84.