Olivia Holt net worth and salary: Olivia Holt is an American actress and singer who has a net worth of $2 million. She is known for starring in several films and TV series including Kickin' It.

Olivia Holt was born in Germantown, Tennessee in August 1997. As a singer she released her debut studio album Olivia in 2016 which reached #16 on the US Heatseekers chart. Her single "Generous" reached #1 on the US Dance chart. Holt starred as Kim Crawford on the television series Kickin' It from 2011 to 2015. From 2014 to 2015 she starred as Lindy Watson on the TV series I Didn't Do It. From 2018 to 2019 Holt starred as Tandy Bowen / Dagger on the series Cloak & Dagger. She has also appeared in or provided voicework for films and TV series including Tinker Bell and the Legend of the NeverBeast, Class Rank, Same Kind of Different as Me, Status Update, Gnome Alone, Girl vs. Monster, Shake It Up, Ultimate Spider-Man, Dog with a Blog, Spider-Man, Runways, and more. In 2018 she won a Teen Choice Award for Choice Summer TV Actor for Cloak & Dagger. 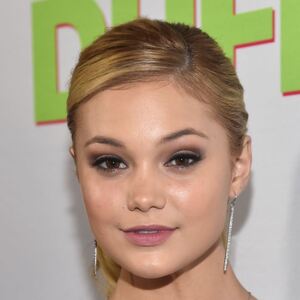