Normani Kordei net worth: Normani Kordei is an American singer who has a net worth of $4 million. Normani Kordei was born in Atlanta, Georgia in May 1996. She is best known for being part of the girl group Fifth Harmony. Kordei is a dancer and gymnast and recorded her first single at 13 years old. She starred in the HBO television series Treme and reached the final of the Miss Texas competition before competing on The X Factor. Fifth Harmony was formed in 2012 and released their debut studio album Reflection in 2015. The album reached #5 in the US, #8 in Canada and New Zealand, and #9 in Spain. Their single "Worth It" (featuring Kid Ink) was certified Platinum and reached #12 in the US and #3 in the UK. Fifth Harmony also had success with the singles "Boss" and "Sledgehammer". Their single "Work from Home" from their 2016 album 7/27 reached #1 in New Zealand and the Top 10 in the US, Australia, Canada, Germany, Ireland, Spain, Sweden, and the UK. The group was named MTV's Artist to Watch at the 2014 MTV Video Music Awards.

As a solo artist, Normani has carved out a successful career of her own. She has collaborated with a number of high profile artists including Calvin Harris, Ariana Grande, Nicki Minaj and Sam Smith. Her single "Motivation" was released in August 2019. It was her first solo song without being a featured artist or having a featured artist. It peaked at #33 on the Billboard Hot 100 chart and was nominated for a number of awards. 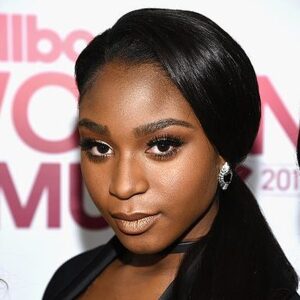