Ninel Conde net worth: Ninel Conde is a Mexican singer, actress, and television host who has a net worth of $8 million. Ninel Conde was born in Toluca, State of Mexico, Mexico in September 1970. Her self-titled debut studio album was released in 2003 and peaked at #3 on the Mexican charts.

Her second album La Rebelde was released in 2005 and reached #5 on the Mexican charts. Her third album Ayer y Hoy was released in 2011 and hit #12 on the Mexican charts. Her first album was nominated for a Latin Grammy in 2004. The same year she participated in the third season of the reality TV series Big Brother VIP. Later that year Conde starred in the TV series Rebelde as Alma Rey until 2006. She was nominated for a TVyNovelas Award in 2006 for Best Lead Actress. In 2013 Conde was a judge on the Univision reality TV dancing competition Mira Quien Baila. She has also starred in Bajo un mismo rostro, Luz Clarita, Perla, Catalina y Sebastian, Besos prohibidos, Como en el cine, La escuelita VIP, La hora pico, Ugly Betty, Fuego en la sangre, Mar de amor, and Porque el amor manda. Ninel was previously married to Mexican actor Ari Telch and had a relationship with Mexican American singer Jose Manuel Figueroa. 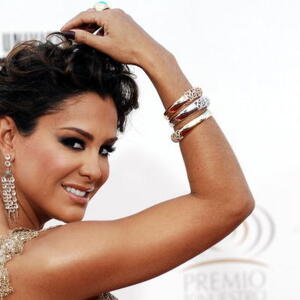