What was Nina Simone's Net Worth?

Nina was known for the singles "Nobody Knows You When You're Down and Out," "Trouble in Mind," "I Put a Spell on You," "To Love Somebody," "Ain't Got No, I Got Life," "My Baby Just Cares for Me," and "Feeling Good" as well as her rendition of "I Loves You, Porgy" from the opera "Porgy and Bess." She published the autobiography "I Put a Spell on You" in 1992 , and she was the subject of the 2015 documentary "What Happened, Miss Simone?" and the 2016 film "Nina." Known as the "High Priestess of Soul," Simone was posthumously inducted into the North Carolina Music Hall of Fame (2009) and the Rock and  the Roll Hall of Fame (2018). Sadly, Nina passed away in April 2003 at the age of 70.

Nina Simone was born Eunice Kathleen Waymon on February 21, 1933, in Tryon, North Carolina. She was the daughter of Mary Kate and Rev. John Devan Waymon, and she had seven siblings. Simone began playing piano at a very early age and often performed at her church. At age 12, she performed in a classical recital, and she said that her parents were forced to move from the front row to make room for white people. Nina refused to perform until her parents were moved back to their rightful spot. John worked as a handyman and once owned a dry-cleaning business, and Mary was a Methodist minister who also worked as a maid. Simone's music teacher set up a fund to help pay for her education, making it possible for her to attend Asheville's Allen High School for Girls. After graduating as valedictorian of her class, she studied with Carl Friedberg at the Juilliard School to prepare for an audition at Philadelphia's Curtis Institute of Music. Curtis ended up denying her application, which was especially disappointing because the family had already moved to Philadelphia in anticipation of Nina attending the school. Simone always suspected that she was rejected because of her race, but the school's staff has denied it.

Nina took a job as an accompanist at Arlene Smith's vocal studio, and she taught piano lessons at her home. She began performing at the Midtown Bar & Grill in Atlantic City, where the owner insisted that she sing in addition to playing the piano. She began using the stage name "Nina Simone" in 1954 because she knew her mother wouldn't approve of her performing "the Devil's music." In 1958, she recorded a cover of George Gershwin's "I Loves You, Porgy," which reached #18 on the "Billboard" Hot 100 and #2 on the Hot R&B Sides chart. In 1959, Simone released her debut album, "Little Girl Blue," and the albums "The Amazing Nina Simone" and "Nina Simone at Town Hall." She signed with Colpix Records after the release of "Little Girl Blue," and the label gave her creative control of her recordings. In 1964, Nina switched to Dutch Philips Records, and her first album for the label, 1964's "Nina Simone in Concert," addressed racial inequality in America with the single "Mississippi Goddam." She later referred to it as her "first civil rights song" and said that it was written "in a rush of fury, hatred and determination." In 1967, Simone left Dutch Philips for RCA Victor, and she performed the song "Backlash Blues" (written by Langston Hughes) on the album "Nina Simone Sings the Blues." 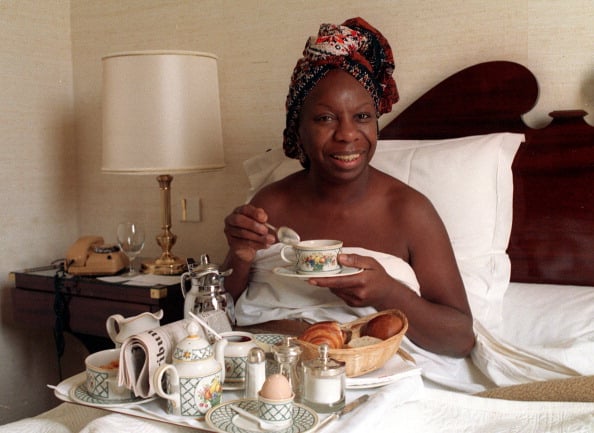 Nina earned a Grammy nomination for the 1970 live album "Black Gold," which featured "To Be Young, Gifted and Black," a civil rights song that was inspired by an unfinished play by her friend Lorraine Hansberry. Simone stated that the music industry boycotted her albums after the release of "Mississippi Goddam," and in 1970, she left the U.S. for Barbados. When she returned, Nina discovered that there was a warrant out for her arrest for unpaid taxes, which she had refused to pay in protest of America's involvement in the Vietnam War. She subsequently returned to Barbados to avoid arrest and began an affair with Prime Minister Errol Barrow. Simone later spent some time in Liberia. In 1974, she recorded "It Is Finished," her final album for RCA, and it would be four years until her next album, "Baltimore," which was released on CTI Records. That album was followed by 1982's "Fodder on My Wings" and 1985's "Nina's Back" and "Live & Kickin." During the '80s, Nina was a regular performer at Ronnie Scott's Jazz Club in London, and in 1987, she released the album "Live at Ronnie Scott's." She moved to Paris and regularly performed at the jazz club Aux Trois Mailletz, then she relocated to the Netherlands in 1988. In 1987, she had a hit in Europe with the single "My Baby Just Cares for Me." The song was on her first album and was re-released after it was featured in a Chanel No. 5 perfume ad. In 1993, Simone moved to southern France and released her final album, "A Single Woman," which reached #19 on the "Billboard" Jazz Albums chart.

Nina married Donald Ross in December 1958, and after they divorced in 1960, she wed Andrew Stroud, a New York detective, on December 4, 1961. Simone and Stroud welcomed daughter Lisa on September 12, 1962, and they divorced in 1971. Andrew served as Nina's manager during their marriage, and he was reportedly abusive toward her. Lisa is now known as Lisa Simone Kelly, and she is a singer and actress who starred in "Aida" on Broadway. Lisa also executive produced the 2015 documentary "What Happened, Miss Simone?," which earned a Primetime Emmy for Outstanding Documentary or Nonfiction Special and an Academy Award nomination for Best Documentary, Feature. In the late '80s, Nina was diagnosed with bipolar disorder, and she was known for aggressive outbursts and a hot temper. In 1985, she accused a record company executive of stealing her royalties, and she tried to kill him by firing a gun at him. In 1995, Simone shot her neighbor's son with an air gun for disturbing her concentration. Nina was sentenced to eight months in jail for the incident, but the sentence was suspended after she underwent psychiatric treatment.

On April 21, 2003, Nina died at her home in Carry-le-Rouet, France, at the age of 70. She spent the last few years of her life fighting breast cancer, and her official website states that Simone died in her sleep. A Catholic funeral service was held at a local parish and was attended by hundreds, such as singer Patti LaBelle and actors Ruby Dee and Ossie Davis. Elton John sent a floral arrangement that included the message "You were the greatest and I love you." Nina was cremated, and some of her ashes were placed in a bronze heart-shaped sculpture that sits inside a statue of her in Tryon, North Carolina. Simone's daughter has a portion of Nina's ashes, and the rest were scattered across several countries in Europe and Africa.

In 2017, Simone was posthumously honored with a Grammy Lifetime Achievement Award, and during her life, she earned two Grammy nominations – Best Rhythm & Blues Solo Vocal Performance, Male or Female for "(You'll) Go To Hell" (1967) and Best R&B Vocal Performance, Female for the album "Black Gold" (1970). Her version of "I Loves You, Porgy" was inducted into the Grammy Hall of Fame in 2000, and her song "To Be Young, Gifted and Black" was inducted in 2019. In 2010, Nina posthumously won an African-American Film Critics Association Award for Best Song for "Four Women" from "For Colored Girls." She received honorary degrees from Malcolm X College and Amherst College, and two days before she died, Simone was informed that she would be receiving one from the Curtis Institute of Music, the school that once rejected her. In 2019, her song "Mississippi Goddam" was preserved in the Library of Congress' National Recording Registry for being "culturally, historically, or aesthetically significant." 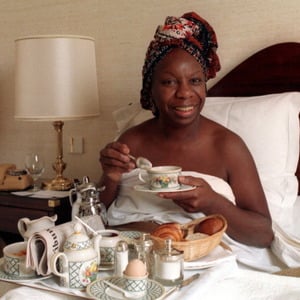