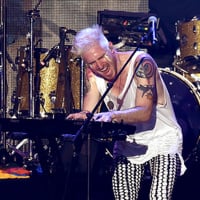 Nicholas Petricca net worth: Nicholas Petricca is an American singer, songwriter, and musician who has a net worth of $6 million. Nicholas Petricca is best known for being the lead singer and founder of the rock band Walk the Moon. He also plays keyboards and synthesizer for the band that he formed in 2008 in Cincinnati, Ohio. The band's name comes from the song "Walking on the Moon" by The Police. Their independent debut studio album I Want! I Want! was released in 2010 and their major label self-titled album was released in 2012. That album reached #36 on the Billboard 200 chart. Walk the Moon's third album Talking Is Hard was released in 2014 and reached #14 on the Billboard 200 chart. Their best known single is "Shut Up and Dance" which was certified Platinum and reached #1 on the US Alternative and US Rock charts. The single reached #4 in the US, Canada, Ireland, and the UK and #3 in Australia. Walk the Moon has also had success with the singles "Anna Sun" and "Different Colors.