After growing up in Abbeydale, Gloucester, Sykes began to pursue a musical career full time. This comes after having sang and performed since the age of 6, and having attended the Sylvia Young Theatre School, which is considered to be very prestigious, since he was 11. Sykes's mother was a music teacher, so between her influence and his natural talent, he grew up with music for much of his life. Throughout his youth, Sykes went on to compete in and win a number of competitions, including 2003's Britney Spears's Karaoke Kriminals, Ministry of Mayhem in 2004, and Live and Unsigned in 2008. In April of 2013 he received surgery in order to correct an issue with his singing that had had him on voice rest for more than a month. Though he did not release the name of his condition, many unconfirmed sources listed it as vocal cord hemorrhage. He was back with the band by June of that year. 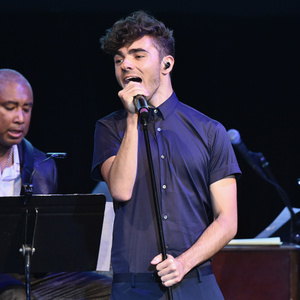