What is Missy Elliott's Net Worth?

Missy Elliott is an American rapper, singer, songwriter, and music producer who has a net worth of $50 million. She was the first female rapper inducted into the Songwriters Hall of Fame, and has sold over 30 million records in the United States.

Melissa "Missy" Arnette Elliott was born in Portsmouth, Virginia, on July 1, 1971. She is the only child of Patricia Elliott, a power-company dispatcher, and Ronnie Elliott, a former U.S. Marine. Her family was active in church, and she began singing in her local church choir from an early age. While her father was an active Marine, the family lived in Jacksonville, North Carolina, although they eventually moved back to Virginia. After suffering through domestic abuse from her father, Elliott and her mother fled when she was fourteen years old, and relocated to the Hodges Ferry neighborhood of Portsmouth. There, Elliott graduated from Woodrow Wilson High School in 1990.

In 1991, Elliott formed the all-female R&B group Fayze. Members included her friends La'Shawn Shellman, Chonita Coleman, and Radiah Scott. They worked with Elliott's neighborhood friend Timothy Mosley (aka Timbaland) as their producer, and their demo tracks caught the attention of producer DeVante Swing. Shortly after, Fayze and Timbaland moved to New York City, where they signed to Elektra Records through DeVante's imprint Swing Mob. This was when they renamed themselves as Sista. All of the 20-plus members of Swing Mob lived in a two-story house in new York, working on a variety of projects and material together. During this time, Elliott contributed to projects for artists like Raven-Symoné and Jodeci, and Sista released their sole album "4 All the Sistas Around da World" (1994).

Swing Mob disbanded at the end of 1995, and Elliott and Timbaland began working together as a songwriting and production team. Together, they created tracks for artists like SWV, 702, Aaliyah, Total, and Destiny's Child. Elliott also became her career as a solo vocalist, featuring on tracks for artists like Sean "Puff Daddy" Combs, MC Lyte, New Edition, and Men of Vizion. In 1996, she signed a deal with East West Records, a division of Elektra Entertainment Group, to create her own imprint called The Goldmind Inc. Her debut solo album "Supa Dupa Fly" was released in mid-1997, and was eventually certified Platinum. In particular, the lead single "The Rain" from the album performed very well. "Supa Dupa Fly" was nominated for Best Rap Album at the 1998 Grammy Awards, but ultimately lost to Puff Daddy's "No Way Out". In the meantime, Elliott continued her successful behind-the-scenes career as a producer and writer, crafting tracks for legendary artist Whitney Houston, and also featuring on Spice Girl Melanie Brown's debut solo single "I Want You Back". 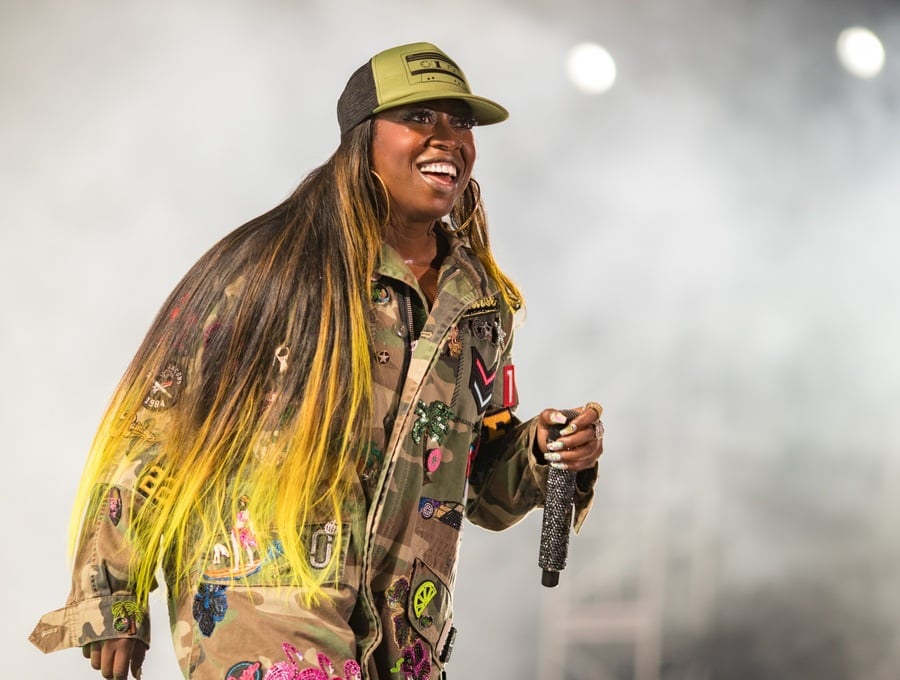 Elliott's second album, "Da Real World" (1999) was just as successful as the first, and sold 3 million copies worldwide. Her third album "Miss E…So Addictive" (2001) was also very successful, and featured artists like Ludacris and Trina. The single "Get Your Freak On" from her third album eventually ended up winning her the 2002 Grammy Award for Best Rap Solo Performance. Other notable work by Elliott from this period include the Christina Aguilera, Lil' Kim, Mya, and Pink cover of "Lady Marmalade" (2001), which she co-produced; she also featured on tracks for a number of artists, including Timbaland & Magoo, Wyclef Jean and Eve. Her fourth album "Under Construction" (2002) was nominated for Best Rap Album and Album of the Year at the 2003 Grammy Awards. Her fifth album, "This Is Not a Test!", was released in November 2003, and has since been certified Platinum by the RIAA. During the late 1990s and early 2000s, Elliott held the title of being the female rapper with the most best-selling albums, selling more than 7.6 million copies in the US.

Elliott's sixth album "The Cookbook" was released in 2005, and was nominated for Best Rap Album at the 2005 Grammy Awards. After this, she focused most of her efforts on production work, and produced No. 1 singles such as Keyshia Cole's "Let it Go" (2007), Jazmine Sullivan's "Need U Bad" (2008), and Monica's "Everything to Me" (2010). Many of the singles produced by Elliott have another gone on to be nominated for Grammy Awards, such as Fantasia's "Free Yourself" and Jennifer Hudson's "I'm His Only Woman". She has also collaborated with a wide variety of artists as a featuring vocalist on their tracks. These artists include The Pussycat Dolls, Demi Lovato, J. Cole, Eve, G-Dragon, Little Mix, Kelly Rowland, Faith Evans, Ariana Grande, and Lizzo. In August 2019, Elliott released her first EP, "Iconology". This was her first body of work since her 2005 album "The Cookbook".

Elliott is very private about her personal life. However, she did reveal in June 2011 that her prolonged absence from the music industry was due to medical issues. After nearly crashing a car because she was suffering from leg spasms, she was diagnosed with Graves' disease, a hyperthyroidism disorder.