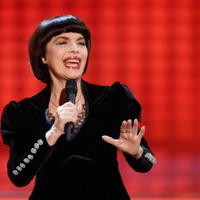 Mireille Mathieu Net Worth: Mireille Mathieu is a French singer who has a net worth of $100 million. Born in Avignon, Vaucluse, France, in 1946, Mireille Mathieu grew up as the oldest of 14 children. She made her first foray into music by entering a local singing competition, On Chante dans mon Quartier. She earned her big break in late 1965, with an invitation to appear on the TV show "Song Parade" in Paris, though she ended up singing live on "Tele-Dimanche", becoming a viewer favorite. Mathieu landed an agent and continued performing on the show. She released her debut album, "En Direct de L'Olympia", in 1966, earning international acclaim. Mathieu has since released more than 70 albums between 1966 and 2013, including "J'ai peur d'aimer un souvenir", "So ein schooner Abend", "Die Liebe einer Frau", "Trois milliards de gens sur terre", "Welterfolge aus Paris", "Mireille Mathieu a Moscou", and "Une place dans mon couer". Her most recent release is 2013's "Wenn mein Lied deine Seele kusst". Mathieu has, at times, been outspoken about politics in her native country, lending her public support to 2007 presidential candidate Nicolas Sarkozy, who has since become France's president. Mathieu is also the recipient of a variety of awards, including the Russian Medal of Friendship, given to her by President Dmitry Medvedev. Despite her public career, Mathieu has never married, and she has no children.