What is Michelle Branch's Net Worth?

Michelle Branch is a Grammy-awarding winning American singer, songwriter, and actress who is best known for her album releases during the early 2000s. Michelle Branch has a net worth of $15 million.

She started singing at the age of three and took voice lessons at eight. For her 14th birthday she got a guitar and taught herself and wrote her first song. Her parents financed her independent album Broken Bracelet in 1998. Branch posted two songs on the Rolling Stone website in 1999 and they were noticed by the pop band Hanson and record producer Jeff Rabhan. In 2001 she signed with Maverick Records.

Her major debut The Spirit Room was released in 2001. The album contained the hit single "Everywhere", which won the 2002 MTV Video Music Award Viewer's Choice Award. The album was certified Double Platinum and sold more than two million copies in the U.S. She won a Grammy Award with Santana for "The Game of Love" in 2003. In 2003 her second album Hotel Paper debuted at #1 on the Billboard 200 chart.

Branch was born on July 2, 1983, in Sedona, Arizona to parents David and Peggy Branch. Her father is of Irish descent while her mother is French and Dutch-Indonesian. She grew up with her older brother, David, and younger sister, Nicole.

When Branch was three, she began singing and then enrolled in voice lessons at the age of eight. She started playing guitar after receiving one on her 14th birthday. Within a week of receiving the guitar, she had already composed her first song. Branch attended Sedona Red Rock High School but then decided to home school during her final two years in order to focus on her music career.

Branch initially began booking local singing gigs in Sedona. She would often sing covers of songs by Sheryl Crow, Lisa Loeb, Fleetwood Mac, and Jewel. She caught the attention of the group Hanson after she posted a couple of her songs to the "Rolling Stone" website, which led to her being able to open for the group twice in 2000.

In June of 2000, Branch released a self-produced album, "Broken Bracelet," which featured a number of songs she had been working on since she was 14. The album was released on the independent record label, Twin Dragon Records. The following year, in 2001, she signed a recording deal with Maverick Records. There she began working with John Shanks in order to produce her first album and major-label debut.

By August of 2001, the album "The Spirit Room," was completed and released. It produced the hit single, "Everywhere," which became a commercial success. It won the 2002 MTV Video Music Awards Viewer's Choice Award. The album also contained a number of other singles that went on to become quite popular, including "All You Wanted" and "Goodbye to You." "The Spirit Room" was certified Double Platinum by the RIAA and sold over two million copies in the United States.

In 2002, Branch began working with Santana and a few more songwriters to produce the song "The Game of Love." The song went on to win a Grammy Award for Best Pop Collaboration with Vocals. In 2003, she also received a Grammy nomination in the Best New Artist category, which was ultimately won by Norah Jones.

In 2003, Branch released her second major album, "Hotel Paper." It debuted at number two on the Billboard 200 chart and went on to receive a Platinum certification for selling over a million copies. The album's hit single, "Are You Happy Now?" earned a nomination for the Grammy Award for Best Female Rock Vocal Performance. 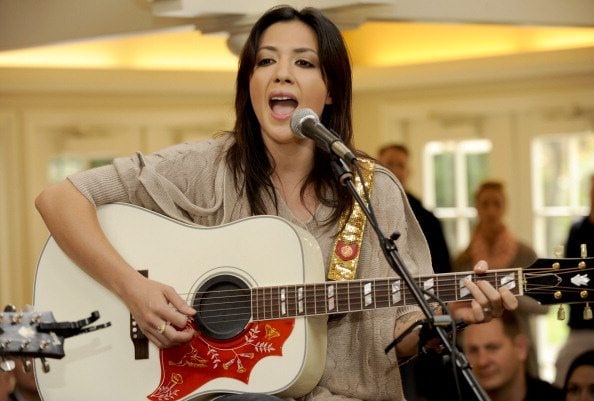 Following her successful music career, Branch appeared in a number of television shows like "Buffy the Vampire Slayer," "Charmed," and "American Dreams." She also appeared in the Rob Schneider film, "The Hot Chick."

In 2005, Branch began collaborating with Jessica Harp, one of her backup singers and a longtime friend. The named themselves The Wreckers and began recording a pop rock and country album. They released their first single, "Leave the Pieces," in February of 2006 and the full album, "Stand Still, Look Pretty," was released in May of that year. The Wreckers also contributed to the Santana album, "All That I Am." They joined country music stars, Rascal Flatts, on their U.S. tour. In 2006, the group was nominated at the CMA Awards for Vocal Duo of the Year and also received a Grammy nomination in the Best Country Performance by a Duo or Group with Vocal. The album was certified Gold by the RIAA. The Wreckers ultimately split in 2007 to work on their respective solo careers.

Branch then worked with Mandy Moore on her upcoming album and wrote a song for the soundtrack to "The Sisterhood of the Traveling Pants 2," which was also featured on the soap opera, "Guiding Light." In 2012, she was nominated in VH1's 100 Greatest Women in Music of All Time. She continued working on her own music and stated that she would be releasing the albums "Everything Comes and Goes" and "West Coast Time," but ultimately neither were released.

In 2015, Branch announced she had signed with Verve Records. Two years later, she released her first album since 2003 called "Hopeless Romantic" in 2017. She then parted ways with Verve records.

In terms of her musical influences, Branch has stated that she has been influenced by Led Zeppelin, Jimi Hendrix, Lisa Loeb, Joni Mitchell, The Beatles, Alanis Morissette, Jewel, Fleetwood Mac, and Cat Stevens. She enjoys both classical and country music and plays primarily on a Gibson Hummingbird guitar.

In May of 2004, Branch married her bass player, Teddy Landau. The couple had a baby girl in August of 2005. In 2014, the couple separated and their divorce was finalized in November of 2015. The same year, Branch met Patrick Carney of the Black Keys at a party. The two then started dating during the production of "Hopeless Romantic" and moved in together in 2017. The couple had a child together, a son, in August of 2018 and the family maintains a residence in Nashville. In August of 2019, they married and announced they were expecting a child in August of 2021.