What is Michael Bublé's Net Worth?

Michael Buble is a Canadian and Italian singer, songwriter, record producer, and actor who has a net worth of $80 million dollars. To date he has sold over 75 million albums worldwide, and has many awards under his belt, including four Grammy Awards.


Michael Steven Buble was born on September 9, 1975, in Burnaby, British Columbia, Canada. His parents are Amber (née Santaga) and Lewis Bublé. He has two younger sisters, and they were raised Roman Catholic. Buble fostered a deep love for music and singing from a young age. His first exposure to jazz music that piqued his interest was Bing Crosby's "White Christmas" album, which his family played when he was around 5 years old. At the same time, he also loved ice hockey and also harbored a desire to become a professional hockey player for the Vancouver Canucks team. His father is a salmon fisherman and as a teenager, Michael Buble spent six summers working as a commercial fisherman alongside his father and crew.

His grandfather Demetrio Santaga was very supportive of his musical dreams, and helped him book singing engagements in nightclubs by offering his plumbing services in exchange for stage time for Buble. His grandfather also supported him by paying for singing lessons. When Buble was 18 years old, he entered a local talent contest and won. However, the event organizer Bev Delich disqualified Buble after finding out he was underage. Instead, Delich signed him up for the Canadian Youth Talent Search, which Buble also won. Delich also worked as his manager for the next seven years, during which Buble worked any job he came across, from clubs and cruise ships to talent shows and hotel lounges. He also appeared on shows like a Bravo! Documentary "Big Band Boom!" (1997) and Vicki Gabereaus's national talk show, and self-financed his own independent albums "First Dance" (1996), "Babalu" (2001), and "Dream" (2002).

Eventually, Buble was brought to the attention of music producer David Foster, and Foster agree to help him produce an album, on the condition that Buble had to raise $500,000 to cover the costs of the album. Eventually, Foster actually covered the costs through his music label, 143 Records. His self-titled album produced by Foster was released in February 2003. It performed pretty well, and hit the Top 10 in Canada, United Kingdom, and South Africa, as well as No. 1 in Australia. He won New Artist of the Year at the 2004 Juno Awards, and the album was nominated for Album of the Year. His second studio album, "It's Time", was released in February 2005, to great positive reception. It reached No. 1 in Canada and the Top 7 in 10 other countries, including the US. "It's Time" helped him win four Juno Awards in 2006 (Album of the Year, Pop Album of the Year, Single of the Year, and Artist of the Year), and he was also nominated for two Grammys. 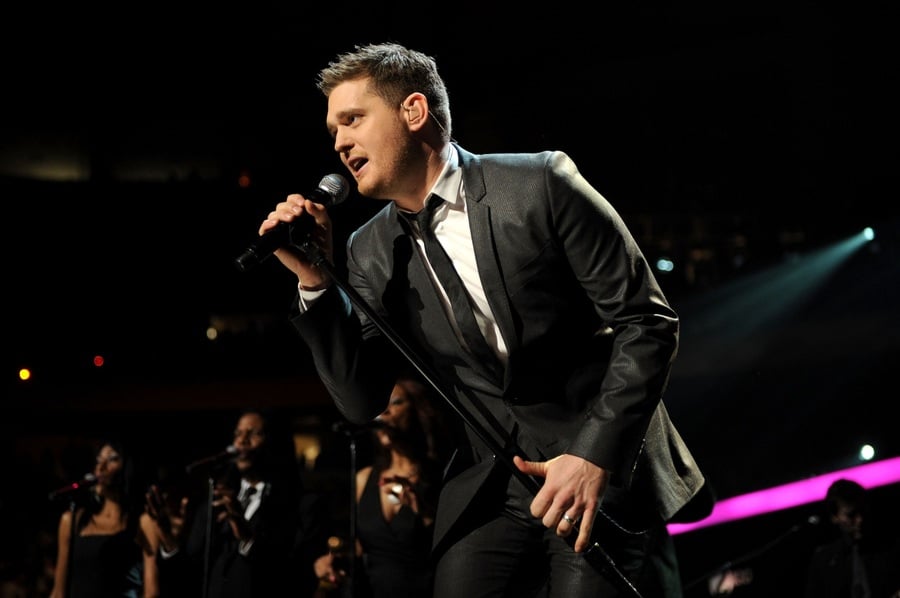 His third professional studio album, "Call Me Irresponsible", was released in May 2007. It featured "Comin' Home Baby", a duet with the group Boyz II Men. It debuted at No. 2 on the Billboard 200 in the US, and by its second week had risen to No. 1 on the chart. His fourth album "Crazy Love" was released in the US in October 2009, and it featured singles like "Haven't Met You Yet" and "Cry Me a River". The album once again won him four Juno Awards, in 2010. He followed this with his first Christmas album, "Christmas", in October 2011. It has been very popular, and has actually been the best-selling Christmas album in Australia for several years running.

In 2005, Buble starred in a commercial for Starbucks and their Frappucino line. In the commercial, he sang lines from his single "Come Fly with Me". He has also appeared in advertisments for Fiat Chrysler Automobiles, Target, Sears, Kmart, and the sparkling water brand Bubly. In August 2016, he launched his own perfume line, Michael Buble Fragrances, in 30 different countries. The line also features several bath and body products, including scented body lotion and shower gel.

Previously, Buble was engaged to the actress Debbit Timuss. They had appeared together in the musical "Red Rock Diner" (1996) and "Forever Swing" (1998). Additionally, she also sung background vocals on his album "It's Time", and was featured in the music video for his single "Home". Their engagement ended in 2005. He then began dating English actress Emily Blunt in 2005, shortly after they met at the Australian Logie Awards earlier that year. She also contributed to some of his works, for example she sang background vocals on the track "Me and Mrs. Jones". Buble and Blunt broke up in July 2008.

Following the end of his relationship with Blunt, Buble began dating the Argentine actress Luisana Lopilato. They got engaged in November 2009, and married in March 2011. Together, they have three children. Their oldest son, Noah, has struggled with severe health issues. He was diagnosed with liver cancer hepatoblastoma in 2016, and after undergoing treatment, including chemotherapy and radiotherapy, is in remission.

Since 2005, Buble has held dual Italian and Canadian citizenship. He is a noted hockey fan, and has co-owned the team the Vancouver Giants since December 2008. 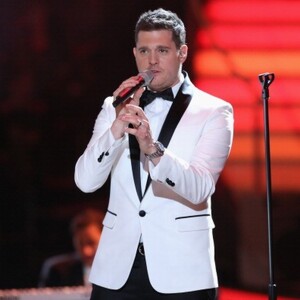