Merle Haggard net worth: Merle Haggard was an American country and western songwriter, singer and instrumentalist who had a net worth of $40 million dollars. Born April 6, 1937 in Oildale, California, Merle Haggard (nicknamed The Hag), helped create 'the Bakersfield sound', along with country great Buck Owens and Haggard's band The Strangers. The Bakersfield sound was characterized by the unique mix of traditional country steel guitar and the twang of a Fender Telecaster guitar. The 'sound' also incorporated a new vocal harmony style and a rough edge that a more polished Nashville music industry was not accustomed to. In the '70s, Haggard aligned with another growing movement known as the 'outlaw country' movement and his success continued to increase well into the 2000s. In his early years, Haggard committed a number of minor legal offenses to include thefts and writing back checks and was even sent to a juvenile detention center in 1950 for shoplifting. He was also once arrested for robbery, along with a friend, but they were later released when the real robbers were found. In 1957, he was arrested after he tried to rob a Bakersfield roadhouse and was sent to a Bakersfield jail, where he attempted an escape and was transferred to San Quentin Prison in California. In 1964, Haggard's life was finally on track when he recorded Wynn Stewart's song Sing a Sad Song, which resulted in a national hit. Haggard's subsequent #1 hits include Mama Tried, Okie from Muskogee, The Fightin' Side of Me, Cherokee Maiden, Pancho and Lefty (with singer Willie Nelson) and many more. He has won multiple awards, including Top Male Vocalist 7 times between 1966 and 1970. President Ronald Reagan 'pardoned' Haggard in 1972. In 1994, Haggard was inducted into the Country Music Hall of Fame. Merle Haggard died on April 6, 2016, the day of his 79th birthday. 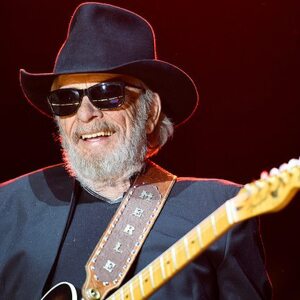