What is Meghan Trainor's Net Worth?

Meghan Trainor is a Grammy-winning American singer-songwriter, musician, and producer who has a net worth of $14 million. She is best known for her 2014 hit song "All About That Bass." She has gone on to enjoy an incredibly successful career.

Meghan Elizabeth Trainor was born in Nantucket, Massachusetts, on December 22, 1993. Her parents, Kelli and Gary Trainor, are jewelers. She has two brothers, Ryan and Justin. Her father was also an organist, and she first began singing at her family's Methodist church when she was six years old. Her family supported her and encouraged her to pursue her interest in music, and she began writing and recording her own songs using the digital software GarageBand.

When Trainor was twelve years old, she started playing music with the cover band Island Fusion. Her fellow band members included her father, aunt, and younger brother Justin. When she was in middle school, her family relocated from Nantucket to North Eastham, Massachusetts. There, she attended Nauset Regional High School, where she sang in a jazz band for three years and also studied guitar and the trumpet.

Between the ages of fifteen and seventeen, Trainor independently released her own music that she had written, recorded, produced, and performed. In total, during this period she released three different original albums: "Meghan Trainor" (2009), "I'll Sing with You" (2011) and "Only 17" (2011). She also released the song "Take Care of Our Soldiers" in April 2010, and donated all of the proceeds from the song to the United Services Organizations (USO) and Cape Cod Cares for Our Troops.

After attending the Summer Performance Program at the Berklee College of Music in 2009 and 2010, Trainor had actually landed a full scholarship to attend the school for college after she graduated from high school in 2012. Instead, she chose to sign a contract with the Nashville-based music publishing group Big Yellow Dog Music. She had been referred to Big Yellow Dog by former NRBQ member Al Anderson, after she introduced herself to him at a music conference and impressed him with her songwriting skills. With Big Yellow Dog, Trainor put those songwriting skills to use and began her career as a songwriter-for-hire. One of the main reasons why she started her career with songwriting instead of being a recording artist herself was because she was not confident that she would be able to achieve success. During this period, she relocated to Nashville from Nantucket and wrote songs for artists like Hunter Hayes, Rascal Flatts, and Sabrina Carpenter.

In late 2013, Trainor teamed up with producer Kevin Kadish to co-write the song "All About That Bass". They offered the song to several record labels, but were rejected by them all. Then, Trainor performed the song for Epic Records chairman L.A. Reid, and he signed her to the label almost immediately after. "All About That Bass" was released on June 30, 2014, and was an instant hit. Not only did the accompanying music video go viral, the song spent eight consecutive weeks at No. 1 on the Billboard Hot 100 chart. After selling 11 million units globally, it was certified diamond by the RIAA. In total, "All About That Bass" reached No. 1 in a staggering 58 countries worldwide. 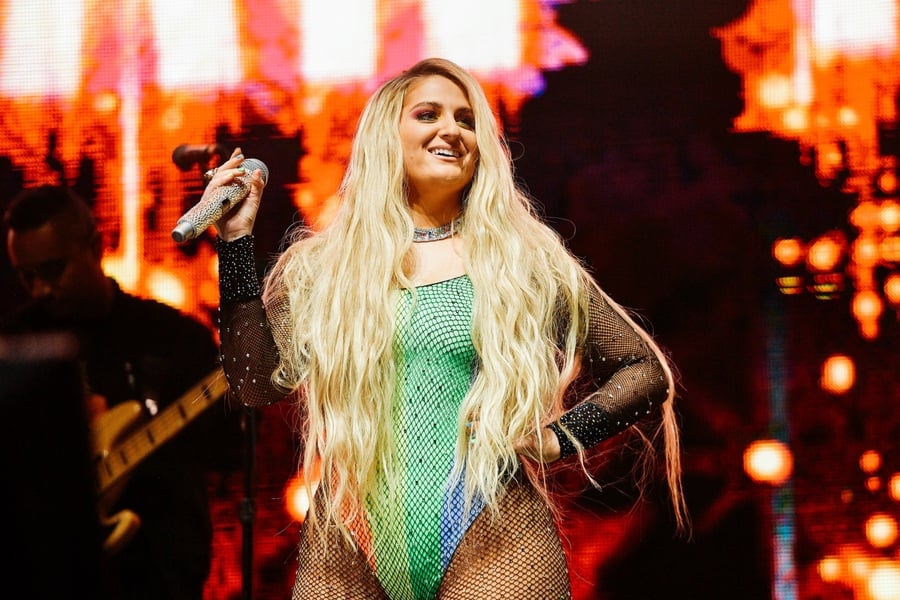 Trainor followed the success of "All About That Bass" with her first EP, "Title", in September 2014. Then, in October 2014, she released her second single "Lips Are Movin". It had a similar retro style as "All About That Bass", and peaked at No. 4 on the Billboard Hot 100. Prior to the release of her first major-label studio album, all three of Trainor's previously self-released albums were removed from sale. Her album "Title" was released on January 9, 2015, and replaced her earlier EP of the same name. Despite mixed critical reviews, the album debuted at No. 1 on the US Billboard 200, and was certified triple platinum by the RIAA. In February 2015, Trainor embarked on her first headlining concert tour, That Bass Tour, which featured the Australian band Sheppard as the opening act. Throughout the rest of 2015 though, Trainor was plagued by a vocal cord hemorrhage diagnosis and had to eventually undergo surgery in August that year.

In February 2016, at the 58th Annual Grammy Awards, Trainor won the Grammy Award for Best New Artist. In May 2016, she released her second major-studio album "Thank You". The album debuted at No. 3 on the US Billboard 200, and was certified platinum. Her other albums are "Treat Myself" (2020) and "A Very Trainor Christmas" (2020).

In February 2015, Trainor made headlines when she told a British tabloid that she was "flat broke" and living off handouts from her record company. This was obviously shocking news considering the fact that "All About That Bass" had sold over 6 million copies, and her new song "Lips Are Movin" had just hit No. 1 at the time. The reality was that Trainor just hadn't been paid yet. Under a typical recording contract, artists must wait nine months from when a song or album is released before they receive their cut of the profits. In Trainor's case, she likely received a VERY large check in April 2015.

As you'll learn in a moment, within a year she had enough money to buy $7 million worth of real estate in Los Angeles.

In December 2020 Meghan and Daryl paid $6.6 million for a 10,000 square foot mansion in Encino, California. The home, which was previously owned by a hip-hop producer/artist, features a state-of-the-art recording studio. 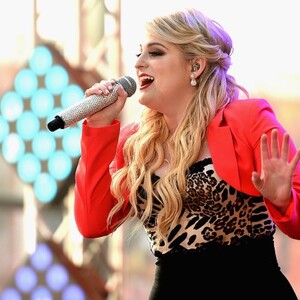