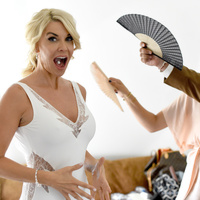 McKenzie Westmore Net Worth: McKenzie Westmore is an American actress and singer who has a net worth of $2 million dollars. Born April 26, 1977 in San Fernando, California, and the third child of makeup artist Michael Westmoreland and wife Miriam, she is best known for her role as Sheridan Crane on the daytime soap opera Passions, where she also met the man who became her real life husband, Keith Volpone. She made her first feature film appearance at the age of three when she played Robert DeNiro's (Jake LaMotta) daughter in the Oscar-winning film Raging Bull. She also has made appearances in the film Star Trek 9: Insurrection, television shows Star Trek: Voyager, Weird Science, Star Trek: The Next Generation, and daytime soap opera Days of Our Lives. Westmore has extensive theater training that includes the Lee Strasberg Theatre Institute and the Uta Hagen Master Class. She is a trained opera singer and has appeared on stage in Dido & Aneas, The Sound of Music and The Little Shop of Horrors. In 2008 she guest-starred on an episode of Friends as herself and appeared on Season 3 of Dexter that same year. On December 12, 2008, Westmore debuted in the recurring role of Dr. Riley Sinclair on ABC's daytime drama All My Children.