Matthew Tuck net worth: Matthew Tuck is a Welsh singer and musician who has a net worth of $5 million. Matthew Tuck was born in January 1980. He is best known for being the lead vocalist and rhythm guitar player for the heavy metal band Bullet for My Valentine. The band formed in 1998 and released their debut studio album The Poison in 2005.

Their second studio album Scream Aim Fire was released in 2008 and reached the Top 5 in the UK, Australia, Austria, Germany, Sweden, and the United States. Bullet for My Valentine released their third album Fever in 2010 which also reached the Top 5 in the UK, Australia, Austria, Finland, Germany, and the US. The band also released the albums Temper Temper in 2013 and Venom in 2015. Their latest album reached #1 in Australia and Switzerland. The band has had the singles "4 Words (To Choke Upon)", "Suffocating Under Words of Sorrow (What Can I Do)", "All These Things I Hate (Revolve Around Me)", "Tears Don't Fall", "Scream Aim Fire", "Hearts Burst into Fire", and "Waking the Demon" all reached #1 on the UK Rock charts. Tuck is also part of the super group AxeWound which formed in 2012 and released the album Vultures the same year. 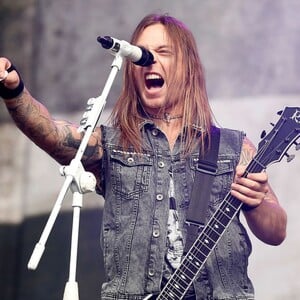