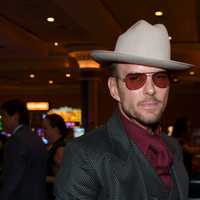 Matt Goss Net Worth: Matt Goss is an English singer-songwriter and musician who has a net worth of $4 million. Matt Goss was born in London, England in September 1968. Goss was the lead singer of the pop group Bros with his twin brother Luke Goss and Craig Logan. Their debut studio album Push in 1988 was certified 4x Platinum in the UK. The album reached the top 10 on the charts in the UK, Australia, Germany, New Zealand (#1), Norway, and Switzerland. Their 1989 album The Time was certified Gold in the UK and also achieved success. Their most popular singles included "When Will I Be Famous?", "Drop The Boy", "I Owe You Nothing", "I Quit", "Cat Among The Pigeons/Silent Night", "Too Much", and "Chocolate Box". Matt Goss turned solo in 1995 and has sold more than five million records. Goss signed a three year contract with Caesars Palace in 2010 and has won several awards for his show. His debut solo studio album Life You Imagine was released in the UK in 2013 and in the United States in April 2014. He has also authored two books.